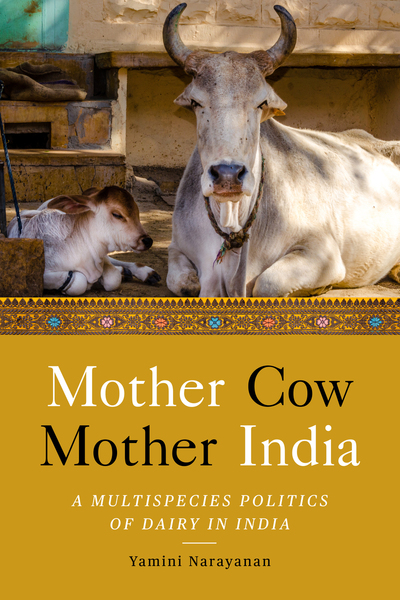 India imposes stringent criminal penalties, including life imprisonment in some states, for cow slaughter, based on a Hindu ethic of revering the cow as sacred. And yet India is among the world's leading producers of beef, leather, and milk, industries sustained by the mass slaughter of bovines. What is behind this seeming contradiction? What do bovines, deemed holy in Hinduism, experience in the Indian milk and beef industries? Yamini Narayanan asks and answers these questions, introducing cows and buffaloes as key subjects in India's cow protectionism, rather than their treatment hitherto as mere objects of political analysis.

Emphasizing human–animal hierarchical relations, Narayanan argues that the Hindu framing of the cow as "mother" is one of human domination, wherein bovine motherhood is simultaneously capitalized for dairy production and weaponized by right-wing Hindu nationalists to violently oppress Muslims and Dalits. Using ethnographic and empirical data gathered across India, this book reveals the harms caused to buffaloes, cows, bulls, and calves in dairying, and the exploitation required of the diverse, racialized labor throughout India's dairy production continuum to obscure such violence. Ultimately, Narayanan traces how the unraveling of human domination and exploitation of farmed animals is integral to progressive multispecies democratic politics, speculating on the real possibility of a post-dairy society, based on vegan agricultural policies for livelihoods and food security.

Yamini Narayanan is Senior Lecturer in International and Community Development at Deakin University.

"A thoroughly researched and highly innovative scholarship at the frontier of new political developments and Anthropocenic challenges. This book will push you to think about those dimensions usually clouded by refracting syllables. The Brahminical nationalist assumptions of dairy as strength and hominid centrism of the globe have received a thorough challenge by Narayanan. Much awaited credit is honored to fellow nonhuman animals who have participated in nation-building by sweat, blood, milk, skin, flesh, and soul for the believers. A successful project that manages to deliver the message with aplomb and sincerity. Narayanan has delivered a timely call to action."

"Yamini Narayanan' Mother Cow, Mother India addresses the unsettling questions we have needed, but failed, to ask about connections among race, gender, religion, caste, and species, never losing sight of all the individuals involved. Her devastating critique of the Indian invocation of cow as "mother" exposes how, in the interests of nationalism and capitalism, the idea of mother, like the cow herself, is being continually exploited. Every gift a scholar needs to bring to such demanding and incisive work—compassion, courage, persistence, exhaustive research, and political acumen—Narayanan brings to this amazing and compelling book."

—Carol J. Adams, author of The Sexual Politics of Meat

"Mother Cow, Mother India is a highly sophisticated and empathetically engaged analysis of the cows, buffaloes, and their calves at the heart of India's cow protection politics. Narayanan skillfully elicits in the reader a deep sensitivity to the animals' whose lives, experiences, and deaths are caught up in the dairy and beef industries within a fraught landscape of human politics and violence. This work is nothing short of groundbreaking. It is truly the first of its kind – a great gift to the worlds of both animal studies and South Asia studies, not to mention the global animal advocacy movement."

—Kathryn Gillespie, author of The Cow with Ear Tag #1389