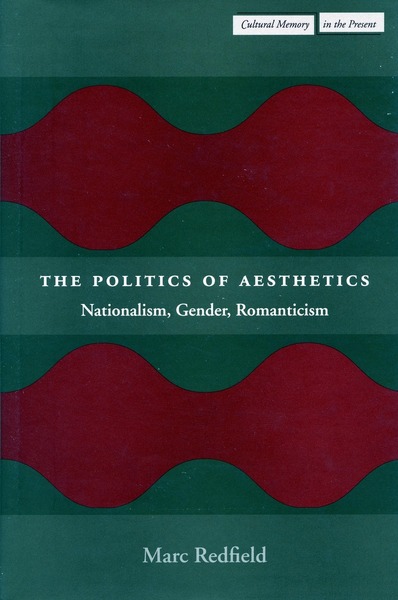 This book suggests that modern cultural and critical institutions have persistently associated questions of aesthetics and politics with literature, theory, technics, and Romanticism. Its first section examines aesthetic nationalism and the figure of the body, focusing on writings by Benedict Anderson, J. G. Fichte, and Matthew Arnold, and arguing that uneasy acts of aestheticization (of media technology) and abjection (of the maternal body) undergird the production of the national body as “imagined community.” Subsequent chapters on Paul de Man, Friedrich Schlegel, and Percy Shelley explore the career of the gendered body in the aesthetic tradition and the relationship among aesthetics, technics, politics, and figurative language. The author accounts for the hysteria that has characterized media representations of theory, explains why and how Romanticism has remained a locus of extravagant political hopes and anxieties, and, in a sequence of close readings, uncovers the “anaesthetic” condition of possibility of the politics of aesthetics.

Marc Redfield is Professor of English and holder of the John and Lillian Maguire Distinguished Chair in the Humanities at the Claremont Graduate University.

"This is a remarkable book of penetrating intelligence. Through a series of deft readings, Redfield shows us how the aesthetic is always entangled in lines of forces beyond art proper. He charts expertly how this works in key texts of the Romantic period, all the while demonstrating powerfully that what we call Romanticism is by no means simply a thing of the past."

"Redfield's indispensible book casts new and important light on what impedes modernity in the region of the aesthetic, and, by its brilliant example, demonstrates what comes of responding to that occlusion with an ethics of reading."

"Readers of the book can expect insightful and interesting readings of de Man, philosophical

aesthetics, and romantic texts. Redfield's account of de Man's theory is both a lucid

explanation and spirited advocacy. Redfield's deconstructive account of the aesthetic, in

particular his discussions of form, is an intriguing reminder of the tension between the ends

of aesthetic effects and their means, linguistic in the case of literature."