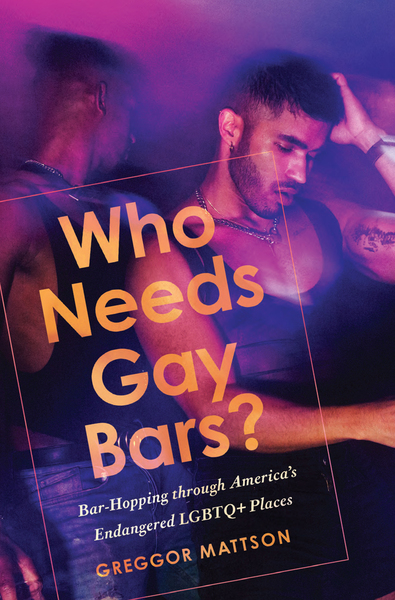 Gay bars have been closing by the hundreds. The story goes that increasing mainstream acceptance of LGBTQ+ people, plus dating apps like Grindr and Tinder, have rendered these spaces obsolete. Beyond that, rampant gentrification in big cities has pushed gay bars out of the neighborhoods they helped make hip. Who Needs Gay Bars? considers these narratives, accepting that the answer for some might be: maybe nobody. And yet...

Jarred by the closing of his favorite local watering hole in Cleveland, Ohio, Greggor Mattson embarks on a journey across the country to paint a much more complex picture of the cultural significance of these spaces, inside "big four" gay cities, but also beyond them. No longer the only places for their patrons to socialize openly, Mattson finds in them instead a continuously evolving symbol; a physical place for feeling and challenging the beating pulse of sexual progress.

From the historical archives of Seattle's Garden of Allah, to the outpost bars in Texas, Missouri or Florida that serve as community hubs for queer youth—these are places of celebration, where the next drag superstar from Alaska or Oklahoma may be discovered. They are also fraught grounds for confronting the racial and gender politics within and without the LGBTQ+ community.

The question that frames this story is not asking whether these spaces are needed, but for whom, earnestly exploring the diversity of folks and purposes they serve today. Loosely informed by the Damron Guide, the so-called "Green Book" of gay travel, Mattson logged 10,000 miles on the road to all corners of the United States. His destinations are sometimes thriving, sometimes struggling, but all offering intimate views of the wide range of gay experience in America: POC, white, trans, cis; past, present, and future.

Greggor Mattson, PhD, is Associate Professor of Sociology at Oberlin College. He is the author of The Cultural Politics of European Prostitution Reform (2016). His work has appeared in academic journals including the Annual Review of Sociology and Urban Studies, as well as in mainstream outlets such as Slate, Literary Hub, Business Insider, and the San Francisco Chronicle.

"Who Needs Gay Bars offers a powerful collection of microsociological portraits of gay bars across the United States. It accumulates into a nuanced map of a queer world shaped by desire, social and political urgencies, and politico-economic pressures as diverse as the community—from large urban to isolate rural outposts. It is ambitious in its expanse and surprisingly intimate in approach."