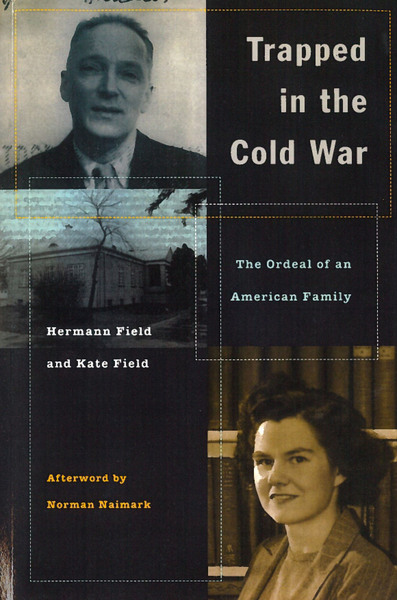 The disappearance behind the Iron Curtain of the American brothers Noel and Hermann Field in 1949, followed by that of Noel’s wife and their foster daughter, was one of the most publicized international mysteries of the Cold War. This dual memoir gives an intensely human dimension to that struggle, with Hermann narrating all that happened to him from the day he was abducted from the Warsaw airport to his release five years later, and Kate relating her unrelenting efforts to find her husband.

Thousands of potential victims of Hitler’s dragnet were rescued in 1939 and during World War II through separate efforts of the Field brothers. Arrested in Czechoslovakia in 1949, Noel was taken to Hungary and used as an example of American perfidy in show trials. Hermann went to Poland primarily to find out what had happened to his brother. After Hermann’s abduction, he was taken to the cellar of a secret Polish prison, where he was held for five years. He gives us a detailed account of his battle to survive, alternating despair and horror with mordant humor. Meanwhile, his family had no idea whether he was still alive and if so, where.

This moving story, based on detailed notes made by the authors during and shortly after the events described, presents an inside-outside counterpoint, as Hermann’s chapters on his inward journey in his cellar world alternate with Kate’s efforts in London to find him by scrutinizing accounts of political events in Eastern Europe for clues and penetrating the diplomatic corridors of power in the West for help. Hermann had been arrested by a Polish security agent who later defected and became one of the West’s most important informants on Soviet operations in Eastern Europe. The search for the Field brothers was complicated by their history of leftist connections, for this tense period in the Cold War was also the era of McCarthyism in the United States. The book ends with an Epilogue that analyzes the events of fifty years ago in the light of what we know today, as the result of newly available archival material.

The late Hermann Field was Professor of Urban and Environmental Policy, Emeritus, at Tufts University. Kate Field holds an honors degree in Economics and Politics from the University of Cambridge. She held an administrative position at Harvard University until her retirement.

"This remarkable document is a moving love story, a tale of sinister international intrigue, and a revealing probe of Cold War politics."

"One of the most compelling memoirs to emerge from the dark days of Stalinism. It is a valuable contribution to history, and it is an impressive tribute to the unconquerable human spirit."

"A 'political thriller' of breathtaking tension."

"The book is written from two different perspectives . . . interwoven with great skill, even elegance, and the reader is thus treated to a powerful and multi-dimensional narrative that is bound to become a classic. It will be required reading for anyone who has a serious interest in the origins of the Cold War."