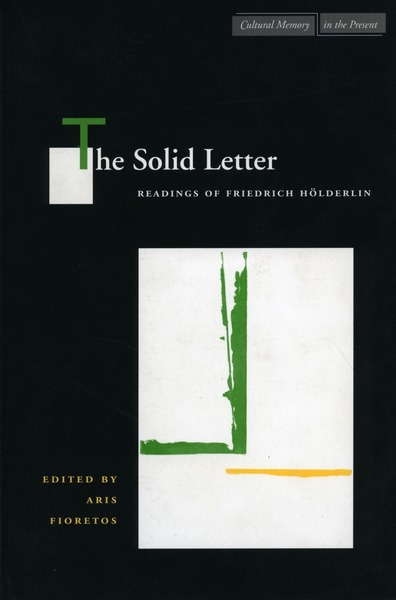 Written in the context of a rejuvenated interest in the work of Friedrich Hölderlin (1770-1843), the essays gathered in The Solid Letter offer the first consolidated attempt in English to set out the many facets of his oeuvre. Addressed not only to specialists in German studies but also to readers interested in modern poetry, philosophy, and aesthetics, the volume is wide in scope but succinct in nature, aiming to assert the relevance of Hölderlin for thinking about history, culture, and language today.

The Solid Letter not only reads Hölderlin's finished work, but also treats the processual character of his writing. By discussing interrelationships among unpublished variants, theoretical and poetic texts, and different conceptions of the distinction between theory and practice, the essays provide an opportunity to reassess the categories by which humanistic study presently is defined.

The volume addresses the implications of Hölderlin's notion of history, the stakes involved in certain of his key concepts, and the significance of seemingly auxiliary materials and kinds of texts not commonly considered intrinsic to an author's oeuvre (such as translations and letters). The essays are attuned to the complex resonances of Hölderlin's writerly practice, thereby contributing to our grasp of the political and historiographical implications of reading.

Aris Fioretos is Senior Researcher in the Department of Comparative Literature at the University of Stockholm. Among his books are a translation into Swedish of Hölderlin's "patriotic hymns" and The Gray Book (Stanford, 1999).

"[The Solid Letter] should bring new readers to Holderlin, and they will be helped by the best bibliography available of translations and criticism in English."