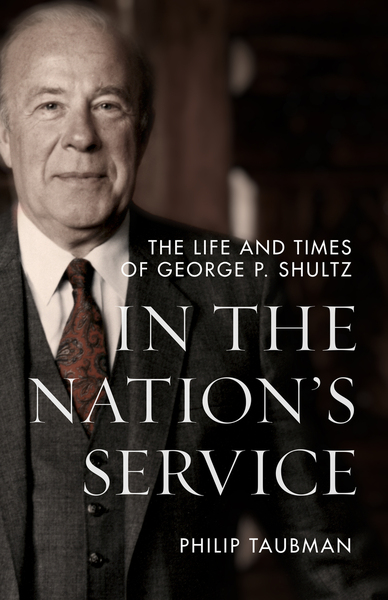 In the Nation’s Service
The Life and Times of George P. Shultz
Philip Taubman

The definitive biography of a distinguished public servant, who as US Secretary of Labor, Secretary of the Treasury, and Secretary of State, was pivotal in steering the great powers toward the end of the Cold War.

Deftly solving critical but intractable national and global problems was the leitmotif of George Pratt Shultz's life. No one at the highest levels of the United States government did it better or with greater consequence in the last half of the 20th century, often against withering resistance. His quiet, effective leadership altered the arc of history. While political, social, and cultural dynamics have changed profoundly since Shultz served at the commanding heights of American power in the 1970s and 1980s, his legacy and the lessons of his career have even greater meaning now that the Shultz brand of conservatism has been almost erased in the modern Republican Party.

This book, from longtime New York Times Washington reporter Philip Taubman, restores the modest Shultz to his central place in American history. Taubman reveals Shultz's gift for forging relationships with people and then harnessing the rapport to address national and international challenges, under his motto "trust is the coin of the realm"—as well as his difficulty standing up for his principles, motivated by a powerful sense of loyalty that often trapped him in inaction. Based on exclusive access to Shultz's personal papers, housed in a sealed archive at the Hoover Institution, In the Nation's Service offers a remarkable insider account of the behind-the-scenes struggles of the statesman who played a pivotal role in unwinding the Cold War.

Philip Taubman is a lecturer at Stanford University's Center for International Security and Cooperation. Before joining CISAC, Mr. Taubman worked at the New York Times as a reporter and editor for nearly 30 years, specializing in national security issues, including intelligence and defense policies and operations. He is author of The Partnership: Five Cold Warriors and Their Quest to Ban the Bomb (2012) and Secret Empire: Eisenhower, the CIA, and the Hidden Story of America's Space Espionage (2003).

"The nuanced diplomacy of George Shultz at the end of the Cold War was a major reason that 45-year conflict ended with a whimper rather than the nuclear bang we had all feared. In his biography about Shultz, Philip Taubman masterfully explains the many keys to Shultz's success, including his giant intellect and understated ability to build personal relationships with his interlocutors in the Soviet Union. In the Nation's Service is a must read for those interested in the life and times of one of our nation's foremost secretaries of state."

"Philip Taubman has written an outstanding book about the extraordinary life and public service of Secretary Shultz. As Taubman describes in these pages, Shultz possessed the rare ability to build consensus among people with diverse and sometimes deeply opposing views, exhibiting an agile diplomacy that allowed him to aid in the peaceful end of the Cold War. Taubman's account deftly captures the character of this American icon, the halls of power in which he served the nation, and the consequential one hundred years in which he lived."