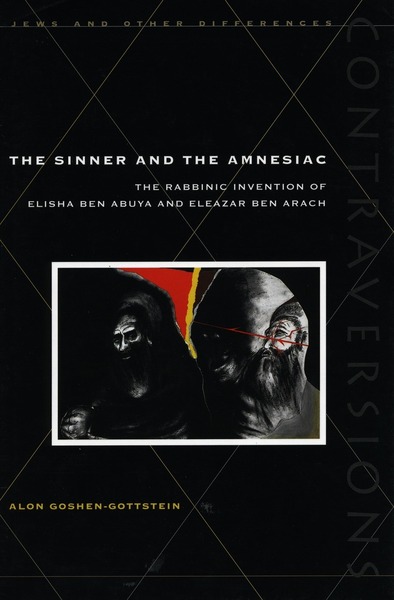 The Sinner and the Amnesiac
The Rabbinic Invention of Elisha ben Abuya and Eleazar ben Arach
Alon Goshen-Gottstein
SERIES: Contraversions: Jews and Other Differences

Elisha ben Abuya is one of the most intriguing figures in early rabbinic literature, consistently capturing the Jewish imagination as the arch-heretic, apostate, and great sinner. Because of the vague nature of the rabbinic sources relating to him, later generations, particularly in modern times, have been able to project upon him the visions of whatever they saw as either negative or ideal in the figure of the rebel apostate.

This book systematically analyzes all sources referring to Elisha ben Abuya, and in so doing, confronts the difficulties of deriving reliable information from rabbinic materials and of writing the biography of a rabbinic hero. The author argues that we have no way of discovering the historical Elisha ben Abuya; he is the product of the creative handling of traditions by later generations. Later generations do not fancifully invent the figure of Elisha but interpret and transmit earlier traditions, trying to resolve the contradictions and to interpret the enigmas they encounter. In the context of this interpretive process, a unique historical image is created, a sage who is born out of tradition, not historical memory.

Alon Goshen-Gottstein is Director of the Institute for the Study of Rabbinic Thought, Bet Morasha, Jerusalem.

"Goshen-Gottstein's book is a masterful analysis of the texts and traditions regarding Elisha ben Abuya and Eleazar ben Arach, and offers great insight not only into the texts relating to these two rabbinic figures, but into the very nature of rabbinic stories and historiography."

"Provides a refreshing examination of the stories of Elisha ben Abuya and R. Eleazar ben Arach . . . .Goshen-Gottstein's systematic treatment and masterful reading of rabbinic texts yields penetrating insights into rabbinic storytelling as a mode of religious and cultural expression."