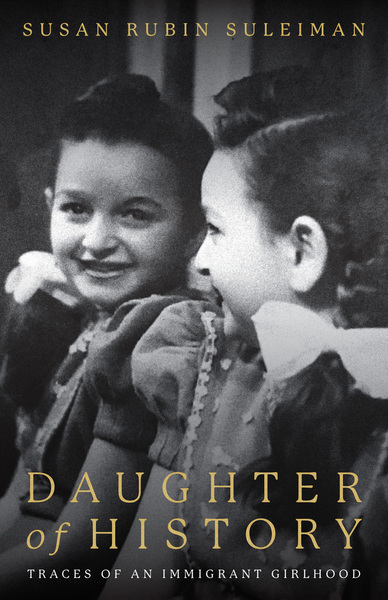 A photograph with faint writing on the back. A traveling chess set. A silver pin. In her new memoir, noted scholar and author Susan Rubin Suleiman uses such everyday objects and the memories they evoke to tell the story of her early life as a Holocaust refugee and American immigrant. In this coming-of-age story that probes the intergenerational complexities of immigrant families and the inevitability of loss, Susan looks to her own life as an example of how historical events shape our private lives.

After the Nazis marched into Hungary in 1944, five-year old Susan learned to call herself by a Christian name, hiding with false papers in Budapest with her parents. While her relatives in the provinces would be among the 450,000 Hungarian Jews deported to Auschwitz, Susan's close family survived and even thrived in the years following the war. But when the Communist Party took over Hungary, Susan and her parents emigrated to Chicago by way of Vienna, Paris, Haiti and New York. In her adult life as a prominent feminist professor, she rarely allowed herself to think about these chapters of her past—but eventually, when she had children of her own, she found herself called back to Budapest, unlocking memories that would change the direction of her scholarship and career.

At the center of this richly textured memoir is a little girl who grows up happy despite the traumas of her early years, surrounded by a loving family. As a teenager in the 1950s, she is determined to become "100% American," until a post-college year in Paris leads her to realize that her European roots and Americanness can coexist. At once an intellectual autobiography and a reflection on the nature of memory, identity, and home, Daughter of History invites us to consider how the objects that underpin our lives become gateways to our past.

Susan Rubin Suleiman is a professor emerita of French and comparative literature at Harvard University. Her many books include The Némirovsky Question (2016) and a previous memoir, Budapest Diary: In Search of the Motherbook (1996). She lives in Chevy Chase, MD.

"Memoir writing, for Susan Rubin Suleiman, is a process of reconciliation. Daughter of History is a compelling journey reconciling intimate memories with the violent history of the twentieth century. The resilience that enables survival is everywhere visible in this story of a vivid writer and groundbreaking scholar who has turned her sharp analytic lens on her own life."

—Marianne Hirsch, author of The Generation of Postmemory: Writing and Visual Culture After the Holocaust

"In exquisitely detailing not only what she can remember but what she can't—including, at one point, her own name—Susan Rubin Suleiman limns history's mark on even her ability to feel. And yet that's not the whole of her story: equally moving is the restorative power of literature. This is marvelous, riveting reading—courageous, insightful and inspiring."

—Gish Jen, author of Thank You, Mr. Nixon and The Resisters

"Using photographs as the spur to memory, Susan Rubin Suleiman takes us on a journey of 'unforgetting.' Like Proust, she is in search of lost time, and in this beautifully written and psychologically wise book, she tells the story of how she became American. Sentences trail her from the farm outside Budapest where she is left at age 5 while Nazis round up Jews in the city to the high school outside Chicago where she is dropped by a girl she had thought her best friend: If I don't get used to this, I'll die, If you don't want me, I'll do without you, along with her mother's admonition don't look as if you didn't belong here. She is history's fortunate daughter and this is a tale of survival. I read it straight through and then it stayed with me, this remarkable study of what she calls 'history's axe'—because here, in a voice so intimate it is as though she is speaking to a close friend, Suleiman reconnects past and present."

—Carol Gilligan, author of In a Different Voice and co-author of Why Does Patriarchy Persist?