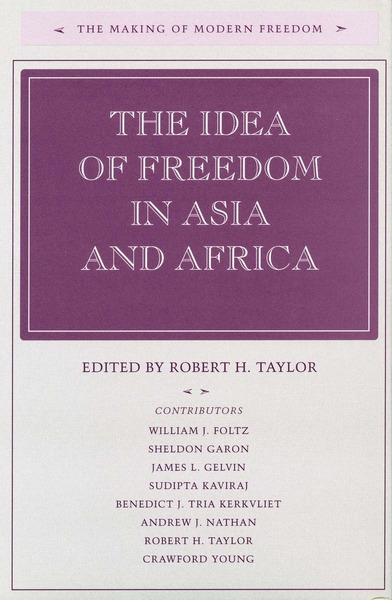 The Idea of Freedom in Asia and Africa
Edited by Robert H. Taylor
SERIES: The Making of Modern Freedom

Universal ideas of freedom are to be found throughout the world’s diverse intellectual and political traditions, spread by the global trade in ideas which has grown exponentially during the past 200 years. In Africa and Asia, the conceptualization of freedom for individuals and societies has been heavily influenced by the translation of specific European or American ideas of freedom into new political and social contexts. This volume represents a pioneering preliminary assessment of some of the causes and consequences of this process.

Africa and Asia have too often been portrayed in Western accounts as having no historical purchase on ideas of freedom, but the chapters in this volume reveal that these societies have long had their own ideas about the proper degree of individual autonomy relative to the authority exercised by the state and other institutions.

The topics covered here are ideas of freedom in Africa from the slave trade era through colonialism to the nationalism that followed World War II (Crawford Young); the many forms of freedom in the states of sub-Saharan Africa since independence (William J. Foltz); why certain concepts of freedom have been empowered and others not in the Arab states of Egypt, Syria, and Iraq (James L. Gelvin); the differing ideas of freedom in modern India for individuals and for specific social groups (Sudipta Kaviraj); the contrasting fates of ideas of freedom in Burma and Thailand (Robert H. Taylor); political struggles in the Philippines and Vietnam about the meaning and practice of freedom (Benedict J. Tria Kerkvliet); the evolution of the idea of freedom in Japan with respect to freedom of religion, freedom of the press, freedom of association, and the liberation of such unfree persons as prostitutes (Sheldon Garon); and the ways in which Chinese conceptions of political freedom resemble or depart from modern Western conceptions (Andrew J. Nathan).

Robert H. Taylor is former Vice-Chancellor and Emeritus Professor of Politics at the University of Buckingham. His books include The State in Burma, Marxism and Resistance in Burma, 1942-1945: Thein Pe Myint's 'Wartime Traveler,' and An Undeveloped State: The Study of Burma's Politics.

"Extensive documentation distinguishes every chapter. An excellent, indeed unique, monograph, The Idea of Freedom in Asia and Africa should appeal to advanced students and all lovers of freedom."

"...The Idea of Freedom in Asia and Africa is a very useful, well-written, and well-edited compilation, which is worth reading for anyone interested in the discourse on freedom in the non-Western world."