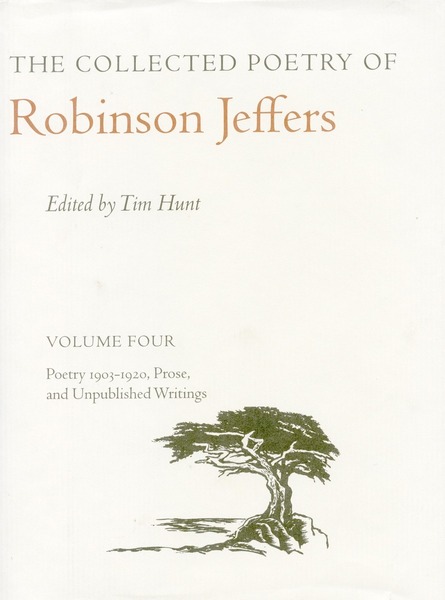 Jeffers consciously set himself apart from the poetry of his generation—by physical isolation at his home in Carmel, by his unusual poetic form, and by his stance as an "anti-modernist." Yet his work represents a profound, and profoundly original, artistic response to problems that shaped modernist poetry and that still perplex poets today.

For Jeffers, as for no other important modern American poet, there has never been a collected poems, not even a truly representative selected poems—the current Selected Poetry, first published in 1938, contains no poems from the last three volumes published during Jeffers's lifetime or from his posthumous volume. Now, for the first time, all of Jeffers's completed poems, both published and unpublished, are presented in a single, comprehensive, and textually authoritative edition of five volumes.

The present volume is in three parts. "Poetry 1903-1920" consists of some of the poems published while Jeffers was a college student, two early collections (Flagons and Apples and Californians), and a number of poems that were never published or were recently rediscovered. "Introductions, Forewords, and Miscellaneous Prose, 1920-1948" gathers all the major prose works. "Unpublished Poems and Fragments, 1910-1962" is mostly material that Jeffers never published, and apparently never tried to publish. The fifth volume of commentary will contain various procedural explanations and textual evidence for the texts presented in the edition, as well as transcriptions of working notes for the poems and of alternate and discarded passages. The Collected Poetry is designed by Adrian Wilson.

"A masterful job of contemporary scholarly editing, this book begins an edition intended to clarify a 'Jeffers canon,' establishing for times to come the verse legacy of a poet who looked on all things with the eyes of eternity."

"This edition will be standard . . . a tribute and justice to a poet whose independent strength has survived to challenge personal and public canons."

"Jeffers is the last of the major poets of his generation—Frost, Stevens, Williams, Pound, Moore, Eliot—to get his collected poems. Now that the job is at hand, it is done very well. . . . Tim Hunt has been painstaking in his editorial preparation and judicious in his presentation. . . . A great poet is ready for his due."

"Few American poets are treated as well by publishers as Jeffers is by Stanford University Press. . . . These poems represent a distinctive voice in the American canon, and it is good to have them so wonderfully set forth."