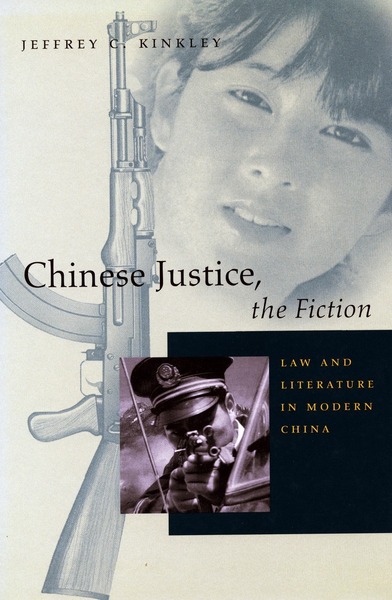 During the first thirty years under communism, China completely banned crime fiction. After Mao, however, crime genres of all kinds—old and new, Chinese and Western—sprang up in profusion. Crime narrative again became one of the most prolific and best-loved forms of Chinese popular culture, and it often embodied the Chinese people’s most trenchant and open critiques of their newly restored socialist legal system.

This is the first full-length study in any language of Chinese crime fiction in all eras: ancient, modern, and contemporary. It is also the first book to apply legal scholars’ “law and literature” inquiry to the rich field of Chinese legal and literary culture. Familiar Holmesian, quintessentially Chinese, and bizarre East-West hybrids of plots, crimes, detectives, judges, suspects, and ideas of law and corruption emerge from the pages of China’s new crime fiction, which is alternately embraced and condemned by the Chinese establishment as it lurches uncertainly toward post-communist society.

Informed by contemporary comparative and theoretical perspectives on popular culture and the fiction of crime and detection, this book is based on extensive readings of Chinese crime fiction and interviews—in China and abroad—with the communist regime’s exiled and still-in-power security and judicial officers. It was in the Orwellian year of 1984 that the authorities set out to control China’s crime fiction and even to manufacture it themselves—only to find that fiction, like the social phenomena it depicts, seems destined to remain one step ahead of the law.

Jeffrey C. Kinkley is Professor of History at St. John's University. He is the author of The Odyssey of Shen Congwen (Stanford, 1987) and the editor and translator of several books in Chinese literary history.

"Kinkley illuminates Chinese conceptions of crime, law, and justice at both official and popular levels from pre-modern times through the 1990s, comparing traditions of Chinese detective fiction with those of American and European authors. . . . Students of Chinese history, literature, sociology, and law all will learn much from this unique book."

"Through his analysis of the works, authors, genres and plots of Chinese crime and court case fiction, Kinkley succeeds in illuminating China's new legal culture from diverse angels. He has written an entertaining and intelligent book on the fiction and facts of the Chinese justice system."

"Kinkley has managed to write a book as fun to read as it should be. . . . Kinkley provides, in Chinese Justice, the Fiction: Law and Literature in Modern China a thorough, well-considered treatment of the history of crime fiction in China. . . . Kinkley's efforts shine brightest during his treatment of the 'golden age' before Mao came to power, as well as in his consideration of the fruition of Chinese crime fiction during these most recent years of rapid change. This fine book is enough to make one hopeful for English-language translations."

"Jeffrey C. Kinkley's book is erudite, witty, carefully researched, and superbly written. That it is the first book-length study in English which addresses the relationship between law and literature in modern China further enhances its significance."

"Jeffrey Kinkley's latest study is without doubt an important and groundbreaking book on a topic that has been virtually ignored by Western scholars and seldom studied even in China: modern Chinese crime fiction."