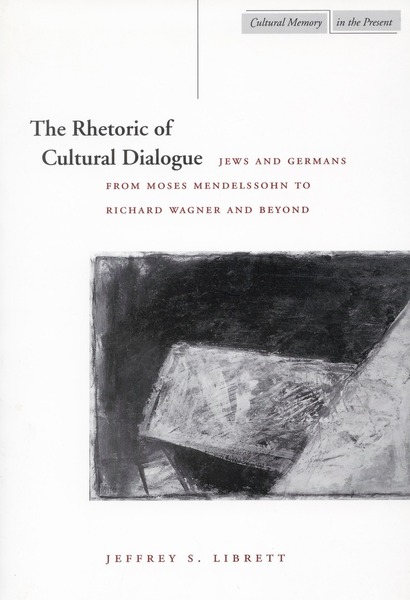 The Rhetoric of Cultural Dialogue
Jews and Germans from Moses Mendelssohn to Richard Wagner and Beyond
Jeffrey S. Librett
SERIES: Cultural Memory in the Present

In this groundbreaking work, the author effects the first extended rhetorical-philosophical reading of the historically problematic relationship between Jews and Germans, based on an analysis of texts from the Enlightenment through Modernism by Moses Mendelssohn, Friedrich and Dorothea Schlegel, Karl Marx, Richard Wagner, Friedrich Nietzsche, and Sigmund Freud. The theoretical underpinning of the work lies in the author’s rereading, in terms of contemporary rhetorical theory, of the medieval tradition known as “figural representation,” which defines the Jewish-Christian relation as that between the dead, prefigural letter and the living, fulfilled spirit.

After arguing that the German Enlightenment ultimately plays out the historical phantasm of a necessary “Judaization” of Protestant rationality, the author shows that German Early Romanticism consists fundamentally in the attempt to solve the aporias raised by this impossible confrontation between Protestant spirit and Jewish letter. In readings of Dorothea Schlegel—Mendelssohn’s daughter—and her husband Friedrich Schlegel, the author provides a new interpretation of the Neo-Catholic turn of later German Romanticism. Further, he situates the proleptic end and reversal of the project of Jewish emancipation in the two extreme versions of late-nineteenth-century anti-Judaism, those of Marx and Wagner, here viewed as binary concretizations of a specifically post-Romantic paganized Protestantism.

Finally, the author argues that twentieth-century Modernism as represented by Nietzsche and Freud renews, if in a multiply ironic displacement, the secret “Judaizing” tendencies of the Enlightenment. Fascism and Communism both denigrate this Modernism, which affirms the letter of language as quasi-synonymous with the force of temporality—or anticipatory repetition—that disrupts all claims to the full presence of spirit. The book ends with a note on recent debates about Holocaust memory.

Jeffrey S. Librett is Associate Professor of Modern Languages and Literatures at Loyola University of Chicago.