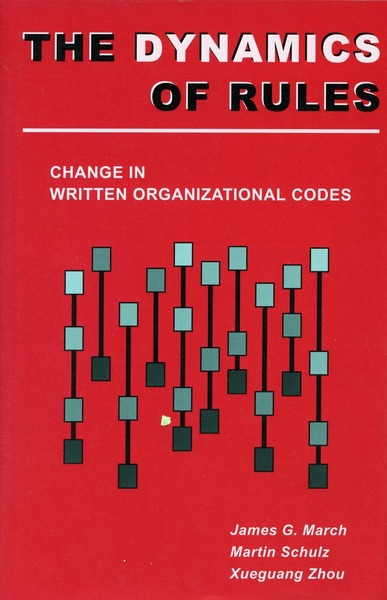 This study uses qualitative and quantitative data from the history of a specific organization, Stanford University, to develop speculations about the ways in which written rules change. It contributes both to a theory of rules and to theories of organizational decision-making, change, and learning. Organizations respond to problems and react to internal or external pressures by focusing attention on existing and potential rules. The creation, modification, or elimination of a rule, then, is a response to events in the outside environment (such as new government regulations) or to events within the organization (such as alterations in internal government structures).

The authors elaborate a simple set of ideas about written rules and their dynamics, emphasizing the interplay among periodic major shocks to the system from outside, experiences with individual rules as they age and are revised, and the spread of effects through an interconnected set of rules. It is a story in which changes introduced in one part of a rule system create adjustments in other parts, including the same rule later in time, as the consequences of the changes are experienced and as rule-making attention is mobilized, satiated, and redirected. These processes involve the full panoply of political negotiation, symbolic competition, discussion, and problem solving that are typical of organizational decision making.

James G. March is Professor Emeritus of Political Science, Sociology, Education, and International Management at Stanford University. Martin Schulz is Assistant Professor of Business Administration at the University of Washington. Xueguang Zhou is Associate Professor of Sociology at Duke University.

"In developing an elegant and sophisticated theory of how and why organizational rules change, the authors have created an entirely new field of organizational research. I know of no other general theory on the rise, evolution, and demise of rules, and I have never seen such a rich longitudinal dataset on rules."