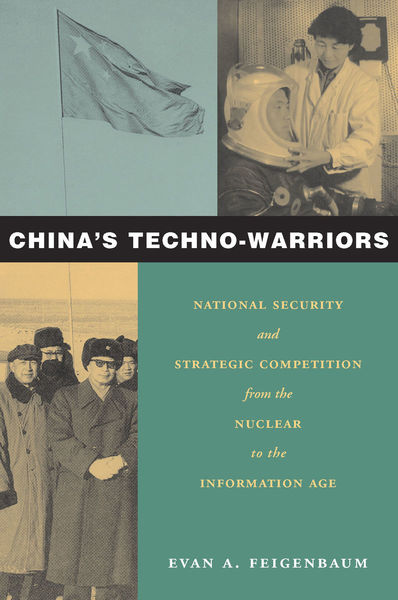 China’s Techno-Warriors
National Security and Strategic Competition from the Nuclear to the Information Age
Evan A. Feigenbaum

In the spring of 1987, the father of China’s strategic missile program, Qian Xuesen, told colleagues that China must steel itself for a century of sustained “intellectual warfare.” His use of a military metaphor was not a linguistic quirk, but reflected the central role of the military in China’s emergence as a modern state, especially in the period since the establishment of the People's Republic of China in 1949. Over the course of the Communist era, a uniquely military approach to China's development became embedded in the ideologies of the country's political leadership, in policy choices about national security and economic development, and in the organizational solutions adopted to put these policies into practice.

This book tells the story of how and why the Chinese military came to play such a powerful role in China's economic and institutional development. It weaves together four stories: Chinese views of technology since 1950, the role of the military in China’s political and economic life, the evolution of open and flexible conceptions of public management in China, and the technological dimensions of the rise of Chinese power.

But the book primarily explores and explains a paradox. This military approach to technology and development emerged during China's period of greatest external threat, 1950-69. Yet these policies and management methods persist even as China enjoys perhaps its most benign strategic environment since the 1840s.

Evan A. Feigenbaum, currently serving as a Member of the Secretary's Policy Planning Staff at the U.S. Department of State, has taught Chinese foreign policy at Harvard University, where he has been Lecturer on Government in the Faculty of Arts and Sciences and Executive Director of the Asia-Pacific Security Initiative in the John F. Kennedy School of Government. He is the author of Change in Taiwan and Potential Adversity in the Strait.

Voted one of the top ten books on Asia in 2003 by Foreign Affairs.

"China's Techno-Warriors is an exceptionally well written volume, whose lively literacy helps turn a doctoral dissertation into an informative and meaningful interpretation of the broad course of China's pursuit of high-technology development from the early years of the People's Republic to the present."

"[P]acked with solid information and exceptional insights. Feigenbaum's [book] is a masterful review of how military considerations have dominated the development of science and technology in China."

"Students of Chinese technical and scientific development owe Feigenbaum a debt of gratitude for so richly constructing the story of China's strategic-technology planners and their organizational and institutional impact."

"This is a wonderfully multi-dimensional book on a subject about which little has been written. It has the added virtue of making its new material relevant to current academic and policy issues, including U.S. export controls, China's entry into the WTO, globalization, and China's economic and military modernization. Feigenbaum provides a good corrective to the reigning paradigm of Chinese bureaucratic politics that holds coordination to be difficult and largely absent in the process. Instead, he shows how China's 'weaponeers' built a system that was designed to overcome those problems."

"Feigenbaum's study is rich in detail and thought provoking in its conclusions."

"Feigenbaum is not the first scholar to examine this topic, but his treatment has brought to it a degree of cogency, empirical support, nuance, and historical sophistication that sets it apart from the existing literature."