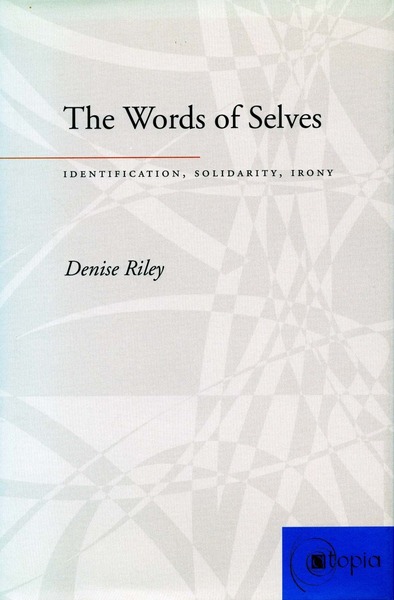 Marlene Dietrich had the last line in Orson Welles's A Touch of Evil: "What does it matter what you say about other people?" The author ponders the question: What does it matter what you say about yourself? She wonders why the requirement to be a something-or-other should be so hard to satisfy in a manner that rings true in the ears of its own subject. She decides that some hesitations and awkwardness in inhabiting many categories of the person—including those celebrated by what is sometimes termed identity politics—need not evidence either psychological weakness or political lack of nerve.

Neither an "identity" nor a "nonidentity" can quite convince. But if this discomfort inhering in self-characterization needs to be fully admitted and registered—as something that is simultaneously linguistic and affective—it can also be cheerfully tolerated. Here language is not treated as a guileful thing that leads its speakers astray. Though the business of being called something, and of being positioned by that calling, is often an unhappy affair, irony can offer effective therapy. Even if uncertain and volatile categorizations do trouble the politics that they also shape, they hardly weaken the empathetic solidarity that is distinct from identification. The verbal irony of self-presentation can be politically helpful. Questioning the received diction of the self cannot be dismissed merely as a luxury of those in secure positions, but instead can move toward a conception of a constructive nonidentity.

This extended meditation on the language of the self within contemporary social politics also considers the lyrical "I" and linguistic emotionality, the historical status of irony, and the possibilities of a nonidentitarian solidarity that is unapologetically alert to the affect of language.

Denise Riley is Reader in the School of English and American Studies at the University of East Anglia. She is the author, most recently, of Am I That Name?: The Category of 'Women' in History.