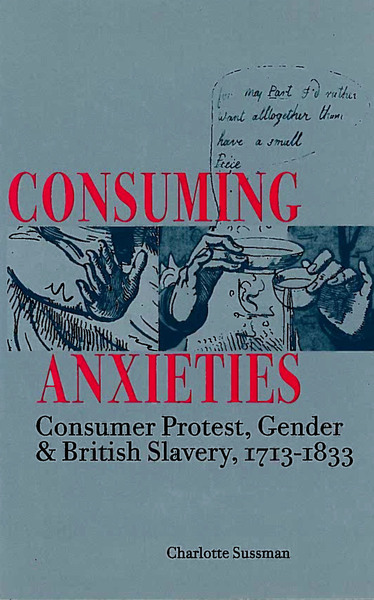 Boycotts are so commonplace these days that one hardly notices them, and yet they have a fascinating history, one closely connected to the growth of the British Empire and the birth of a consumer society. Consuming Anxieties asks why this mode of political protest has proved so influential over the past two hundred years, and why it was particularly useful in anticolonial struggles. It answers these questions through new readings of literary works by Jonathan Swift, Tobias Smollett, and others, as well as through investigations of eighteenth-century political and economic discourses connected with consumer culture and colonialism.

The book examines the history of consumer protests against colonialism from 1713 to 1833—from the Treaty of Utrecht to the abolition of slavery in the British Caribbean. Recognizing the impact of consumerism on perceptions of the colonial periphery during this period reveals the crucial role of commodity fetishism in colonialist ideology. At the same time, acknowledging the effects of colonial and mercantile expansion on domestic consumer practices explains some of the anxiety surrounding colonial commodities. Women played a crucial role in these dynamics, and this book's analysis of gender illuminates the ways in which colonialism permeated not only the public sphere of politics and trade, but also the seemingly private realms of domesticity and sentiment.

The book is in two parts. The first three chapters deal with the history of consumer protests against colonialism and imperialism, notably the uses of the tactic in Ireland early in the eighteenth century and the mid-century anxiety over colonial products in English domestic life. The last three chapters concentrate on the role of commodity culture and consumer protest in the British debates over Caribbean slavery. Although its roots in earlier anticolonial protests are not always recognized, antislavery activists inherited and expertly manipulated a set of tactics developed in previous contests.

Charlotte Sussman is Associate Professor of English at the University of Colorado, Boulder.

"Consuming Anxieties is an absorbing book that deserves to be read and reread. . . . Sussman brilliantly recreates the cultural milieu in which sentimental abolitionism took root."

"Sussman. . . . pulls off the difficult task of writing a truly interdisciplinary study. . . .—Slavery and Abolition

"[An] interesting and well-written book."

"This is an insightful and welcome treatment of an important subject . . . .The style and substance of this volume are evident."