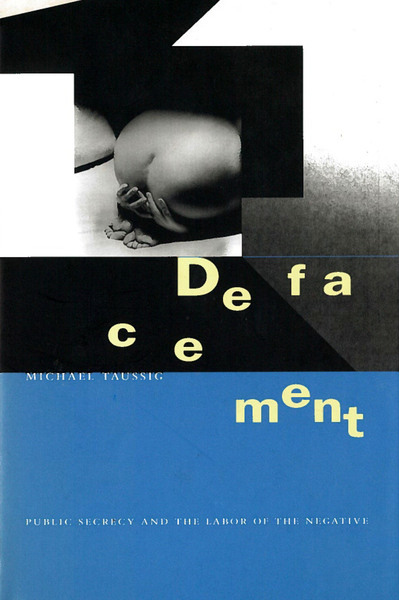 Defacement
Public Secrecy and the Labor of the Negative
Michael Taussig

Defacement asks what happens when something precious is despoiled. It begins with the notion that such activity is attractive in its very repulsion, and that it creates something sacred even in the most secular of societies and circumstances. In specifying the human face as the ideal type for thinking through such violation, this book raises the issue of secrecy as the depth that seems to surface with the tearing of surface. This surfacing is made all the more subtle and ingenious, not to mention everyday, by the deliberately partial exposures involved in "the public secret"—defined as what is generally known but, for one reason or another, cannot easily be articulated.

Arguing that this sort of knowledge ("knowing what not to know") is the most powerful form of social knowledge, Taussig works with ideas and motifs from Nietzsche, William Burroughs, Elias Canetti, Georges Bataille, and the ethnography of unmasking in so-called primitive societies in order to extend his earlier work on mimesis and transgression. Underlying his concern with defacement and the public secret is the search for a mode of truth telling that unmasks, but only to reenchant, thereby underlining Walter Benjamin's notion that "truth is not a matter of exposure of the secret, but a revelation that does justice to it."

Michael Taussig is Professor of Anthropology at Columbia University. He is the author, most recently, of The Magic of the State.

“This volume [which asks what happens when something precious is despoiled] is vintage Taussig. . . . It has the hallmarks of his other works—originality, unusual associations among diverse sources, provocative and definitely contestable interpretations of classic theoretical texts, and a generally intimate, fascinated style of communicating with his readers.”—George Marcus, Rice University