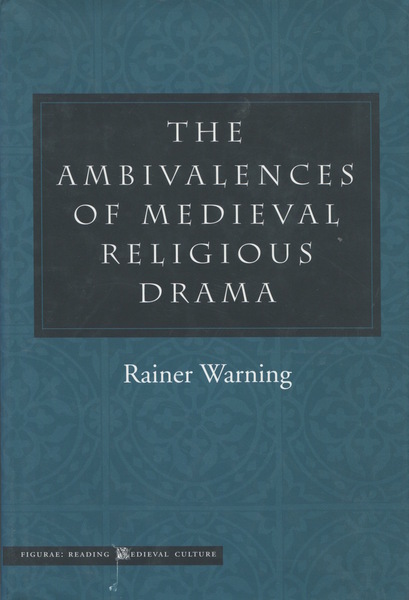 What is medieval religious drama, and what function does it serve in negotiating between the domains of theology and popular life? This book aims to answer these questions by studying three sets of these dramas: tenth-century Easter plays, twelfth-century Adam plays, and fifteenth- and sixteenth-century Passion plays.

However, the author’s intent is not to present a genre history. Instead, he seeks to mediate between the historical development of the plays and a systematic unfolding of the archetypal structure within which the plays grasp salvation history and act it out. His theoretical approach is grounded in the work of Niklas Luhmann, which strongly emphasizes the priority of social functions over institutional structures.

The book’s textual basis is truly European—including works from Germany, France, England, and Spain—and goes beyond “literary” texts to engage a range of sources from sparsely documented folk rituals to high medieval theology. These sources enable the author to encompass the complex structure of popular feasts and religious celebrations that centered on Easter. His methodological program—a systematically informed, structured analysis sensitive to the historical context—identifies recurrent patterns of distortion in these feasts and celebrations vis-à-vis their model, the chapters of Scripture dealing with Christ’s death and resurrection.

Eschewing the conventional view of medieval theater as a depiction of medieval theology, the author convincingly shows that below their textual surfaces, the Easter theatrical and religious celebrations must have served as collective rituals of compensation in whose context the figure of Christ (often, specifically, the actor incarnating the figure) took over the role of the scapegoat. This demonstrates another of the book’s major contributions, that a collaboration between medieval studies and contemporary cultural theory is not only viable but richly rewarding.

Rainer Warning is Professor at the Institut für Romanische Philologie of the University of Munich. This is his first book to be translated into English.

"Medievalists in general as well as scholars of drama in particular will find this an important and thought-provoking study that is as relevant now as it was thirty years ago."