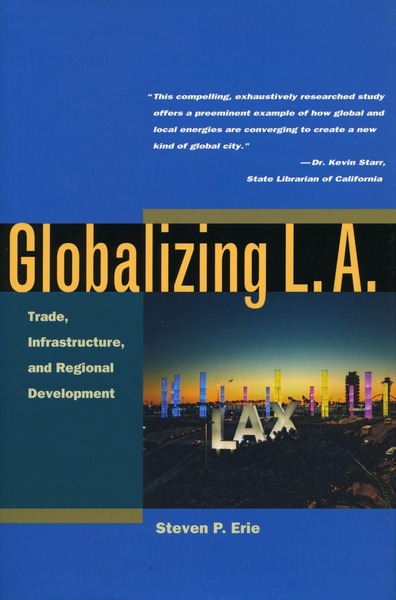 Winner of the 2009 International Author Award, sponsored by the Lambda Alpha International Honorary Society for the Advancement of Land Economics.

How do city-regions successfully compete in the global age? Mixing history and policy analysis, Steven Erie offers a compelling account of the improbable rise of Los Angeles, explaining how a region with no natural harbor and a metropolis situated a distant 20 miles from the coast managed to become the world's ninth largest economy and a leading trade and transportation center. In Globalizing L.A., he argues that physical infrastructure development was a catalytic yet underappreciated factor in the transformation of L.A. and Southern California into a global economy, provocatively challenging the conventional wisdom that emphasizes information flows, intellectual property rights, or social capital. The book also highlights the unheralded role of local political institutions and public entrepreneurs in shaping the region's development, growth, and globalization.

Beginning with the fierce battles over railroad and harbor development in the late nineteenth century, Erie chronicles L.A.'s emergence as the nation's leading trade center and gateway to the Pacific Rim in the twentieth century. The book explores recent epic battles over port development, the expansion of LAX, the landmark Alameda Corridor rail link, and implementing NAFTA border-infrastructure projects.

Until the 1990s, the book argues, L.A. behaved much like a city-state where powerful, semi-autonomous development bureaucracies and entrepreneurial leaders provided the farsighted strategic planning that made these infrastructure projects possible. Today, Southern California faces daunting challenges, from community and environmental resistance to new post-9/11 security concerns, which will affect its future development and global competitiveness.

"A significant new contribution to the study of urban development. . . . This book will change the way we think about Los Angeles and Southern California. . . . It is the next great book on the region."—David Perry, Director and Professor, Great Cities Institute University of Illinois at Chicago

Steven Erie is Director of the Urban Studies and Planning Program and Professor of Political Science at the University of California, San Diego. His first book, Rainbow's End: Irish Americans and the Dilemmas of Urban Machine Politics (UC Press, 1998) received the American Sociological Association's Robert Park Award for the best book in urban sociology and the American Political Science Association's award for the best book in urban politics.

"Steven Erie provides a distinctive and persuasive analysis of political strategies that have been central to shaping the growth of the complex Los Angeles region. The book should be of much interest to scholars who are concerned with the development of the L.A. region and the role of semi-autonomous governments in the United States and beyond."

"A significant new contribution to the study of urban development . . .This book will change the way we think about Los Angeles and Southern California. . . It is the next great book on the region."

"Although there have been several books about the area [L.A.], largely by geographers of the 'L.A. School,' none has captured the interaction of politics and economic interest in the context of key infrastructure investments as Steve Erie is able to do. His combination of mastery of political, financial, and technical elements of development is outstanding. It will be an important contribution to our understanding of regional development."

"This is the first major study of L.A.'s trade infrastructure and goes far beyond earlier books on L.A. It will add significantly to the existing literature on urbanization, the impact of globalization on local communities, the emergence of economic regions or city-states, and the history of the Los Angeles region itself."

"[A] fascinating history of the Los Angeles region's great assets and the forces that that drove their development. . . . One hundred years ago, it was improbable that the Los Angeles region would become the 10th largest economy in the world. In Globalizing L.A., Erie explains how that happened and then, fingers crossed, offers lessons on how California's largest and most diverse city and region can keep playing a leading role."

"Erie has built a potent political-economy of urban development that recognizes the crucial role of the public sector in mediating globalizing processed . . . . and this is a valuable lesson for academics, dockworkers, community developers, and environmental activists alike."

"This book adds invaluably to knowledge of the regional governance and development, foretelling which places will become smart cities and which will be ghost towns."