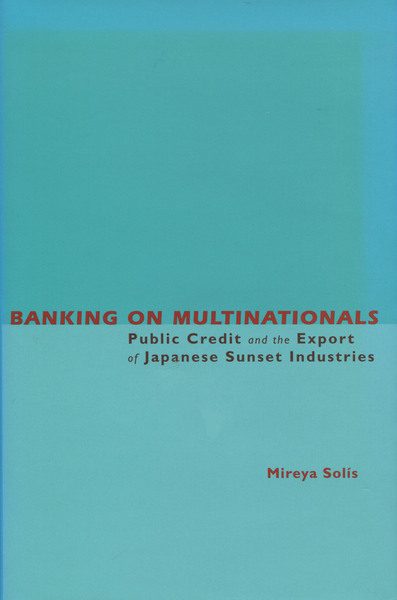 Banking on Multinationals addresses two fundamental puzzles in Japanese industrial policy: Why does the Japanese state—better known for its attempts to control markets, protect infant industries, and maximize national exports—administer the world's largest public program to support the expansion of multinational corporations? And why does the Japanese state not fear loss of control over mobile multinational corporations and erosion of the domestic export base through foreign direct investment (FDI)? Solís's explanation of Japan's lead in state financing of FDI takes into account both the industrial policy goals behind the extension of FDI loans and the political uses of subsidized credit to appease economically weak but politically powerful constituencies.

As the first systematic study of Japan's public FDI loan program, Banking on Multinationals reveals a previously unexamined dimension of Japanese government policy and helps explain the uncanny ability of stagnant sectors and small firms to participate in FDI activities. Rather than simply espousing the familiar idea that Japan's preeminent role as banker to multinationals is evidence of mercantilism in Japanese foreign economic policy, this book brings to life the domestic political conflicts underlying FDI policy.

Mireya Solís is an Assistant Professor at the School of International Service of American University.

"Solis effectively uses a study of Japanese policy on export financing to investigate the interaction among bureaucratic policy goals, political realities, and corporate strategic objectives... She has given us a look inside the interaction of policymaking, political process, and industry competition that should be read by anyone interested in the adjustment process in the Japanese political and economic system."

"Banking on Multiracials is a well documented analysis of the Japanese government's support for some Japanese industries' investments. The author demonstrates beyond quibble tht the government used public funds for the purposes of gaining access to resources such as cotton and aluminum and of aiding industries in decline."

"Overall, this book is an original and distinctive interpretation of Japan's FDI, and makes an important contribution to the literature eon FDI and Japan's industrial policy."

"Solis has made an important contribution to our understanding of the global expansion of Japanese MNCs, and the role of the Japanese state in facilitating this process. I highly recommend this book to scholars and graduate students studying the political economy of Japan."