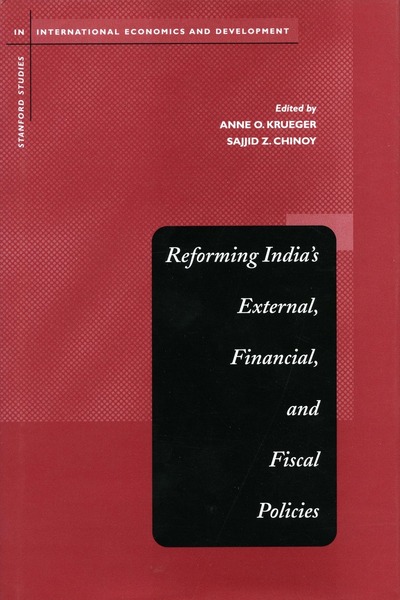 A traditionally conservative country in financial matters, India enacted a series of reforms in response to its balance of payments crisis in the early 1990s. But since then only halting progress has been made, raising concerns about India’s rising fiscal deficit, inefficiencies in its financial system, and its still relatively closed economy.

This book analyzes some of the complex issues currently facing the Indian economy. Looking at India in the international economy, the first section examines reforms of policies toward trade and capital inflows, including issues in exchange rate policy and international business prospects. The second section addresses banking and financial markets, tracking the reforms to date and establishing the need for upgraded technology. The final section compares India's fiscal performance with that of other developing countries, highlighting worrying trends, and presents concrete policy recommendations to advance Indian reforms.

Anne O. Krueger is the First Deputy Managing Director of the International Monetary Fund and the Ritch Professor in Humanities and Sciences at Stanford University. Sajjid Z. Chinoy is an associate at McKinsey and Company, and was a graduate researcher at the Center for Research on Economic Development and Policy reform while at Stanford University, where he received his Ph.D. in economics in 2001.