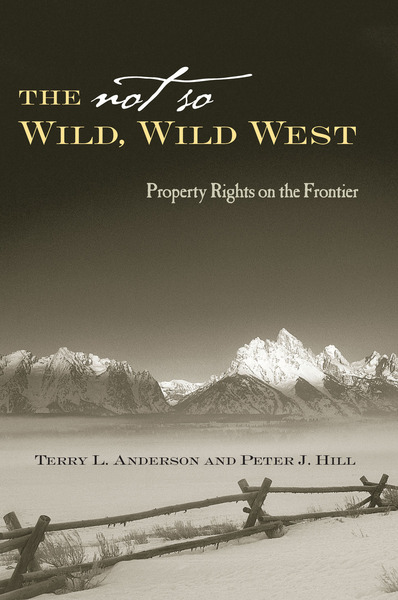 The Not So Wild, Wild West
Property Rights on the Frontier
Terry L. Anderson and Peter J. Hill

Mention of the American West usually evokes images of rough and tumble cowboys, ranchers, and outlaws. In contrast, The Not So Wild, Wild West casts America's frontier history in a new framework that emphasizes the creation of institutions, both formal and informal, that facilitated cooperation rather than conflict. Rather than describing the frontier as a place where heroes met villains, this book argues that everyday people helped carve out legal institutions that tamed the West.

The authors emphasize that ownership of resources evolves as those resources become more valuable or as establishing property rights becomes less costly. Rules evolving at the local level will be more effective because local people have a greater stake in the outcome. This theory is brought to life in the colorful history of Indians, fur trappers, buffalo hunters, cattle drovers, homesteaders, and miners. The book concludes with a chapter that takes lessons from the American frontier and applies them to our modern "frontiers"—the environment, developing countries, and space exploration.

Terry L. Anderson is Executive Director of PERC, the Center for Free Market Environmentalism; Senior Fellow at the Hoover Institution, Stanford University; and Professor Emeritus at Montana State University. He has published 28 books. P. J. Hill is Professor of Economics at Wheaton College, Illinois, and a PERC Senior Associate. This is his eleventh book.

"Hollywood will never be able to top this portrayal of the history of the West in the U.S. The history that Anderson and Hill depict is the current situation of the majority of entrepreneurs in developing and former Soviet countries. It is not only an extraordinary insight into the genesis of America, but also the key to understanding better the Middle East, Central Asia, and all the Third World today."

—Hernando de Soto, President of the Institute for Liberty and Democracy

"Emergent, self-ordering institutional arrangements and property right norms are commonplace. But they are invisible to all those who rely upon them to create wealth, and who may believe falsely that all such rules come from legislated law. Anderson and Hill have made visible an impressive array of examples from US frontier history."

"Far from being an anarchic free-for-all, the American West was a ferment of social innovation, a place where men and women strove to invent co-operative arrangements they could trust. Anderson and Hill powerfully undermine the pervasive idea that social order and property rights are imposed from above by the state, and reveal instead that they are usually achieved from below by free negotiation between individuals."

—Matt Ridley, Author of The Origins of Virtue: Human Instincts and the Evolution of Cooperation and Nature via Nurture

"The Not So Wild, Wild West represents the best of what the new institutional economics can contribute for understanding economics and political behavior in the American West."

—Gary Libecap, Eller College of Business and Public Administration, The University of Arizona

"This is a book that had to be written, and Anderson and Hill are the ones that had to write it. Literature on the American West has placed too much emphasis on wars, violence, and conflict. Rather time and time again, as this book shows, institutions were devised that peaceably allocated resources and resolved conflicts."

"I give the book high marks for shedding new light on old paradigms and for accumulating solid evidence for an economic interpretation of western history."

"From wagon trains to wildlife and from mining rights to irrigation companies Not So again and again challenges conventional wisdom and challenges us all with its rigorous application of freely transferable property rights."

"This new book is more accessible to the historian and interesting to the general reader. It is essential reading for anyone with an interest in western history, political science, law, or economics."

"The Not So Wild, Wild West is a beautifully written and printed volume that teaches us much about the American West, but also about human nature and the economic way of thinking. Congratulations to Terry Anderson and P.J. Hill for an outstanding book."