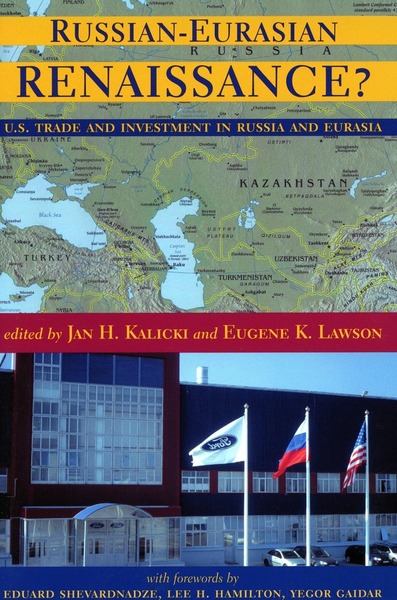 How might Russia and Eurasia attract private investment and trade from the West over the next several years, and what conditions in Russia and Eurasia may Western investors and traders expect? In this unprecedented volume, leading American experts and policymakers and their Russian and Eurasian counterparts survey economic prospects for the region and assess its important resources and institutions.

The book begins by examining the overall trade and investment outlook in Russia and Eurasia. It then takes up critical sectors: energy, aerospace, automobiles, agriculture, and telecommunications. It turns to current institutional impediments to trade and investment such as problems in corporate governance, the banking system, and the rule of law. The final chapters look to the future and assess the prospects for economic reform, the movement to join the World Trade Organization, and the impact of political dynamics in the region.

The experts are joined by Georgian President Eduard Shevardnadze and former Russian Prime Minister Yegor Gaidar, who in their forewords acknowledge not only the crucial importance of trade and investment for the future but also the necessity of bringing the integrity of institutions up to international standards. A third foreword by the former chairman of the House Foreign Affairs Committee, Congressman Lee H. Hamilton, stresses the place of commerce in economic growth and in the integration of Russia and Eurasia with the world community.

“This timely and valuable book provides a fresh and highly informative understanding of Russia’s and Eurasia’s integration with the world economy. It does so at a critical time, in light of new strategic and economic realities.”

“This book covers an enormous amount of ground in a very accessible way. It should be of value to anyone in the field, generalist or specialist.”

“This excellent book from a star quality cast of contributors is an invaluable guide to both the perplexed and proficient investor and trader. Never before has so much useful information on the recent history and analysis of the investment and trade picture and climate in Russia been brought together. This is a 'must read' for anyone interested in doing serious business in the new and emerging Russia and the former states of the old Soviet Union.” —Thomas R. Pickering, Senior Vice President, The Boeing Company; former Under Secretary of State and U.S. Ambassador to the Russian Federation

“Whether you are a Russian or Eurasian policymaker seeking growth for your country or an investor or business executive seeking opportunity there, this serious and useful book belongs on your bookshelf.”