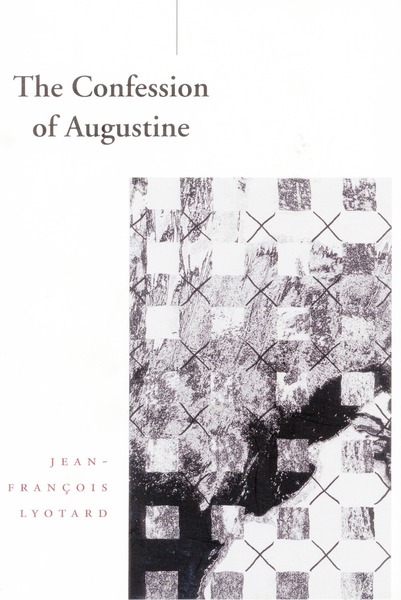 The Confession of Augustine
Jean-François Lyotard, Translated by Richard Beardsworth
SERIES: Cultural Memory in the Present

Winner of the 2001 Aldo and Jeanne Scaglione Prize for a Translation of a Scholarly Work of Literature, sponsored by the Modern Language Association.

This remarkable posthumous work by one of the leading philosophers of the twentieth century engages Augustine's Confessions, one of the major canonical works of world literature and the very paradigm of autobiography as a definable genre of writing.

Lyotard's explication of Augustine is also a final survey of the entirety of the philosophical enterprise, a philosopher's profound reflections on the very basis of philosophy. He sees the Confessions as a major source of the Western—and decidedly modern—determination of the self and of its normativity, the point of departure for all reflection and the condition of possibility of all experience. Lyotard suggests that Augustine's "I," Descartes's "cogito," and Husserl's "transcendental ego" in essence or structurally say the same thing.

Lyotard aims at no simple ascription of Augustine's position. Instead, his text centers on what he takes to be Augustine's central confession: the repeated avowal of an essential uncertainty concerning the status of the faith confessed, of being in a sense already too late, of a difficulty in being no longer of this world while being in it all the same. Far from offering the foundation of all subsequent journeys to selfhood, Lyotard sees the Confessions as many evocations of a certain loss of self, of a temporality that is not given or recuperated all at once—or once and for all—but that time and again is lost or forgotten.

The late Jean-François Lyotard was Professor of Philosophy at the University of Paris VIII and Professor of Humanities at Emory University. Stanford has published two other books of his: Lessons on the Analytic of the Sublime (1994) and The Inhuman: Reflections on Time (1992).

" . . . this work is less a book about the Confessions as it is an insight into a twentieth century philosopher at the end of his life. . . . With prose bordering on the poetic, Lyotard entices and captivates throughout. His final insights here disclose how Augustine's own autobiography is really an omni-biography: a story every soul tells as it comes to realize, as Lyotard's last line puts it, that only at the "end of the night forever begins.""

—The Review of Metaphysics