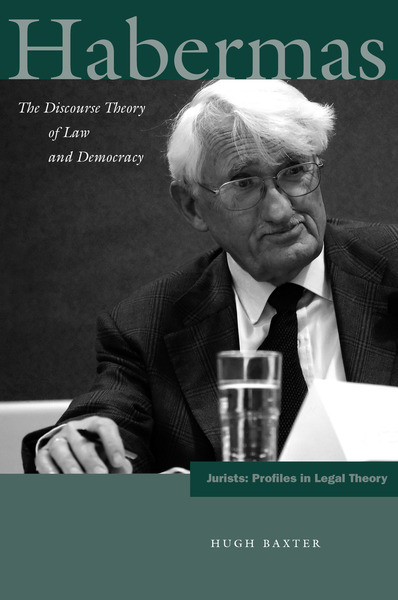 Though many legal theorists are familiar with Jürgen Habermas's work addressing core legal concerns, they are not necessarily familiar with his earlier writings in philosophy and social theory. Because Habermas's later work on law invokes, without significant explanation, the whole battery of concepts developed in earlier phases of his career, even otherwise sympathetically inclined legal theorists face significant obstacles in evaluating his insights.

A similar difficulty faces those outside the legal academy who are familiar with Habermas's earlier work. While they readily comprehend Habermas's basic social-theoretical concepts, without special legal training they have difficulty reliably assessing his recent engagement with contemporary legal thought. This new work bridges the gap between legal experts and those without special legal training, critically assessing the attempt of an unquestionably preeminent philosopher and social theorist to engage the world of law.

Hugh Baxter is Professor of Law and Philosophy at Boston University.

"A must read for all those interested in an exposition of Jürgen Habermas's fundamental contribution to legal scholarship."

"A clear, well-judged, and cool assessment of Jürgen Habermas and his debates with Niklas Luhmann, two giants of twentieth-century social theory."

—Tim Murphy, The London School of Economics and Political Science

"Baxter's study offers the first extended discussion of the development of Habermas's views on law and society—a development not without its own tensions and difficulties—from The Theory of Communicative Action to Between Facts and Norms. It also highlights the underacknowledged influence of Niklas Luhmann, the other great contemporary German legal and social theorist, on Habermas's views as a whole. An informed and important contribution to our understanding of Habermas's political, legal, and social theory."