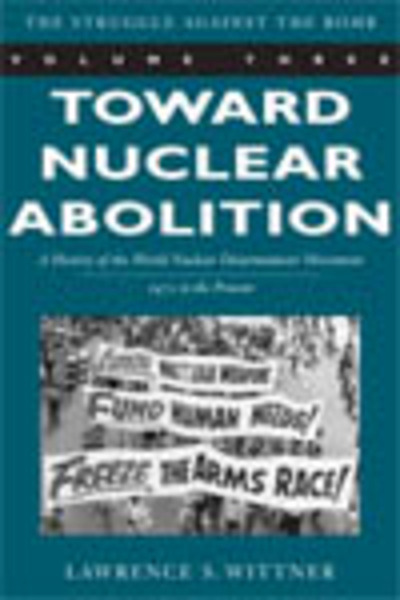 Toward Nuclear Abolition presents the inspiring, dramatic story of how citizen activists helped curb the arms race and prevent nuclear war. Examining events from 1971 to the present, the author continues the account he began in two earlier volumes, One World or None and Resisting the Bomb. The book shows how pressure from the Nuclear Freeze campaign in the United States, the European Nuclear Disarmament campaign, and comparable movements around the world foiled the nuclear ambitions of hawkish government officials and forced them toward nuclear arms control and disarmament. A leading historian and peace researcher, the author combines extensive scholarly research with a pathbreaking account of how the largest mass movement of modern times saved the world from nuclear annihilation.

Lawrence S. Wittner is Professor of History at the State University of New York, Albany.

"...a monumental study that deserves to be widely read."

"Once again, for that great purpose, public opinion in all countries must be mobilised. Lawrence S. Wittner's Toward Nuclear Abolition: A History of the World Disarmament Movement helps in that task to perfection. Readers of his previous books will need no incitement to get their hands on this one."

"The saga of the world disarmament movement, whose complex strands Lawrence Wittner has brilliantly and lucidly woven together in Toward Nuclear Abolition, deserves the widest possible readership and retelling."

"For clues about how to save the planet from nuclear extinction, there is no better place to turn than to Lawrence S. Wittner's monumental three-volume study of the world disarmament movement from 1945 to the present."

"The final volume of Lawrence Wittner's trilogy is a major contribution to the history of the international peace movement. It covers every major event, organization and activist leader in recent decades and features the same rigorous research in many formerly unused sources, clear writing and even-handed approach that characterized his first two volumes. No single review can do it justice...We are all in debt to him for completing such a difficult project."

"Wittner has it dead right: It's time to organize and press once again for serious arms control and disarmament."

"Wittner's impressively researched, clearly written, and balanced assessment of the anti-nuclear-weapon movement belongs on the shelf not only of every serious student of the nuclear arms race but also of everyone who is concerned about the safety of humanity."

"...the most comprehensive and authoritative account available of the world nuclear disarmament movement in the most effective period of its history."