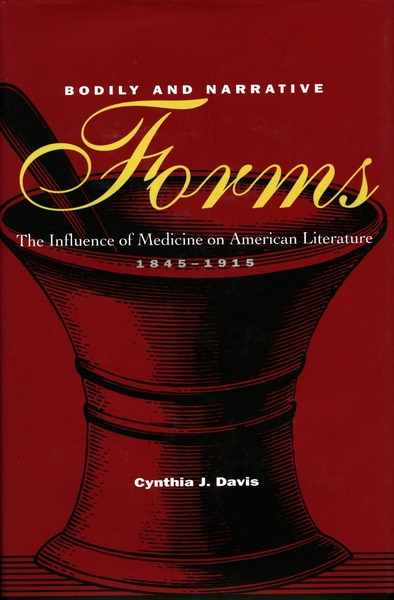 During the period of the professionalization of American medicine, many authors were concerned with a concurrent tendency to define identity in biological terms. Most of them doctors or patients themselves, they used literature polemically to convey their views about the meaning of the body and the origin and cure of disease. This book demonstrates that emergent medical beliefs about bodily functions and malfunctions surface in the writings of these authors not simply as thematic concerns but as problems for narrative form. Through a series of careful, historicized readings of works by a range of authors—including Louisa May Alcott, Charles W. Chesnutt, Margaret Fuller, Charlotte Perkins Gilman, Frances E. Watkins Harper, Oliver Wendell Holmes, Jr., Pauline E. Hopkins, William Dean Howells, and Elizabeth Stuart Phelps—the book relates both the what and the how of representation to specific theories of embodiment emerging during this burgeoning yet awkward period of medical history.

Through five case studies, Bodily and Narrative Forms charts the possibilities literature offers for promoting or contesting biological definitions of the self. These studies identify narrative structure as one of the places where the body is represented—a place often overlooked but crucial to understanding the complicated, mediated relationship between context and content, as well as the dynamic, complex properties of form, whether narrative or corporeal. Each of the studies documents authorial efforts to depict corporeal beliefs via literary forms, demonstrating that these depictions extend beyond narrative content to include generic and stylistic choices. They also show the complex ways in which formal attributes and strategies may complicate authors' attempts to directly represent—as well as readers' attempts to directly access—the body through literature.

Cynthia J. Davis is Assistant Professor of English at the University of South Carolina, Columbia. She is the co-author (with Kathryn West) of Women Writers in the United States: A Timeline of Literary, Cultural, and Social History.

"Davis' connection of the medical and the literary is exciting, and her knowledge of the texts she investigates and the history of American medicine is impressive. . . ."