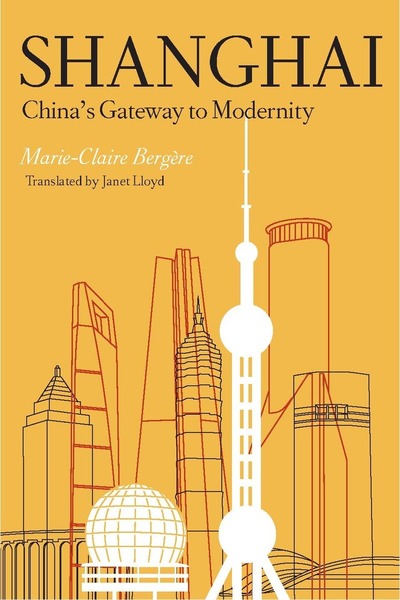 Shanghai today is a thriving, bustling metropolis. But does its avid pursuit of the modern trappings of success truly indicate that it will once again become the shining example of China's commercial and cosmopolitan culture? While history continues to unfold, eminent China scholar Marie-Claire Bergère takes readers back to when Shanghai first opened to the world in 1842 to narrate the city's tumultuous and unique course to the present.

Shanghai: China's Gateway to Modernity is the first comprehensive history of Shanghai in any Western language. Divided into four parts, Bergère details Shanghai's beginnings as a treaty port in the mid-nineteenth century; its capitalist boom following the 1911 Revolution; the fifteen years of economic and social decline initiated by the Japanese invasion in 1937, and attempts at resistance; and the city's disgraced years under Communism. Weaving together a range of archival documents and existing histories to create a global picture of Shanghai's past and present, Bergère shows that Shanghai's success was not fated, as some contend, by an evolutionary pattern set into motion long before the arrival of westerners. Rather, her account identifies the relationship between the Chinese and foreigners in Shanghai—their interaction, cooperation, and rivalry—as the driving force behind the creation of an original culture, a specific modernity, founded upon western contributions but adapted to the national Chinese culture.

Eclipsed for three decades by socialism, the wheels of the Shanghai spirit began to turn in the 1990s, when the reform movement took off anew. The city is again being referred to as a model for China's current modernization drive. Although it makes no claims to what will happen next, Bergère's Shanghai stands as a compelling and definitive profile of a city whose urban history continues to be redefined, retold, and resold.

"Although other authors have written about aspects of Shanghai's history detailed here, none have brought so much together in a single volume . . . The narrative structure renders it useful as a textbook, and the analyses provide useful starting points for student essays. Given the growing number of courses that focus on Shanghai's history this volume should appear in many university libraries."

"This translation of Marie-Claire Bergère, Histoire de Shanghai (originally published in French by Fayard, in 2002), makes available to readers of English a study offering the best introduction to its subject. In a field of academic research which has produced an entire industry of publications, Bergère's Shanghai can claim this high status not only by virtue of the knowledge reflected in it but also by being a model of clear and elegant writing, assisted by a flawless translation. The overall result is a book to savour, a history of a great city that will appeal to specialists and general readers alike."

"Marie-Claire Bergère expertly weaves together a great mass of disparate material that has been published on China's most dynamic city. In the process, she leavens her authoritative rendering of social and economic history with some coverage of cultural history, and her evocation of Shanghai's paradoxical position in the reform era is compelling."

"The history of Shanghai since the nineteenth century can stand as an accurate shorthand for the history of the changes that China has experienced over the past two centuries. The city was an established port and county seat before Europeans gained permission to sojourn there, but its rapid integration into the world economy and culture following their arrival transformed both the city and d the context within which China would reorient and reorganize itself in the face of Western imperialism. This is the story that Bergère tells so well, in a clear, well-organized, accessible style. She writes in terms of political and economic "rhythms" that shape and punctuate Shanghai's history. The pace is naturally suitable for describing a cosmopolis, it also serves to set up a loose analytical framework to think about the fluctuations that have put the city through its rocky and exciting history. The book is engrossingly written, managing to show the depths of Bergère's knowledge of the city's history while informing readers who are not China specialists without ever condescending to them."

"After examining more than 150 years of Shanghai's history and its starring role in mediating the march of foreign innovation and influence in China, eminent China scholar Marie-Claire Bergère leaves us with a provocative question: Will politics support or impede Shanghai's destiny as teacher and adviser in shaping China's modernity? I eagerly await the answer history reveals." 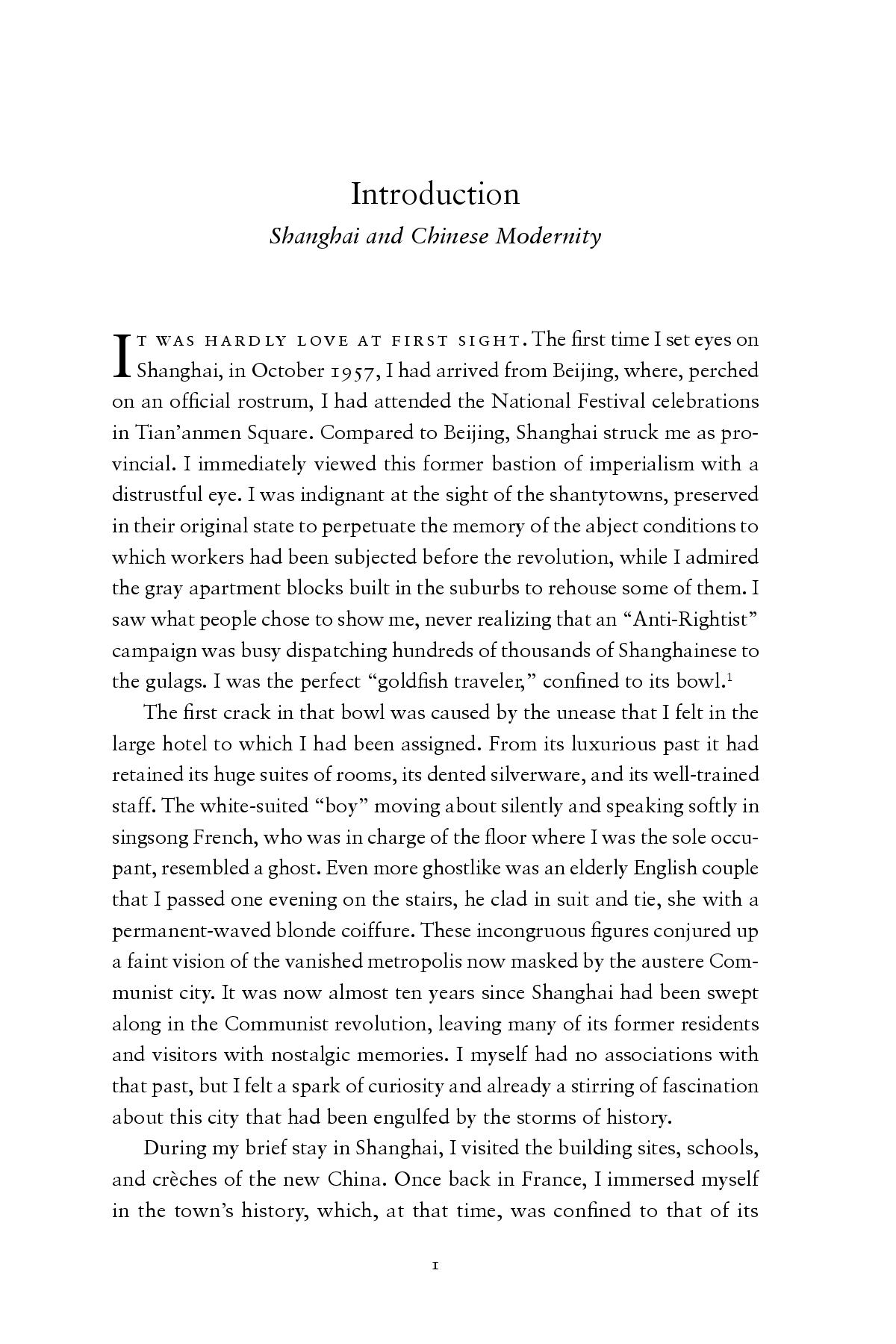 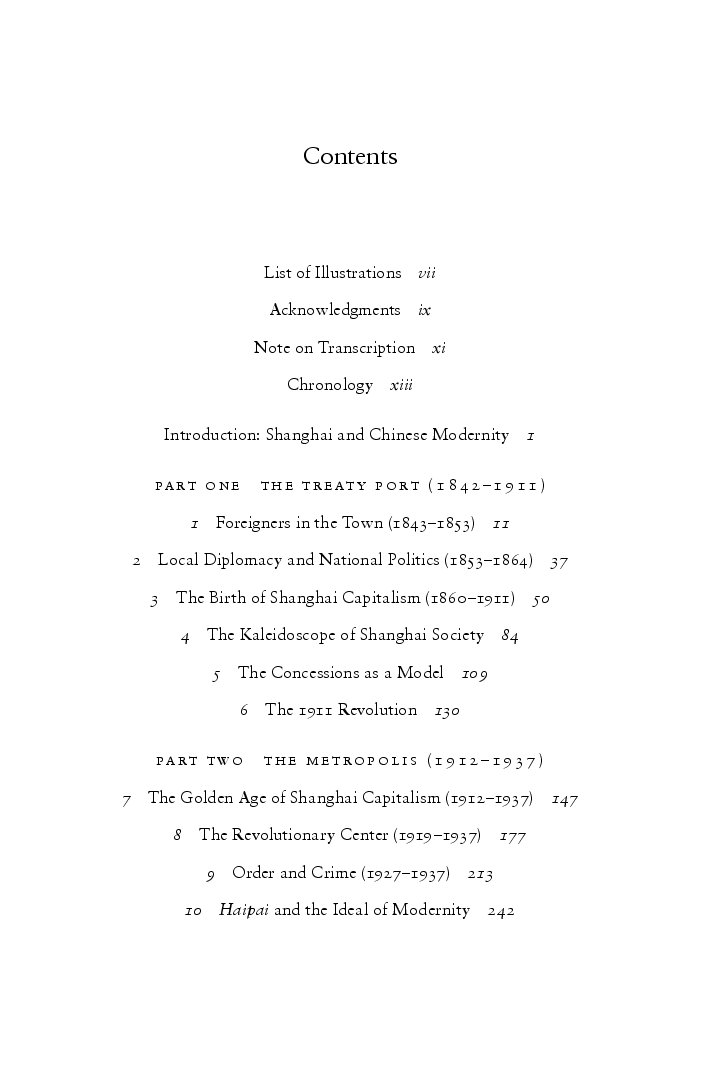