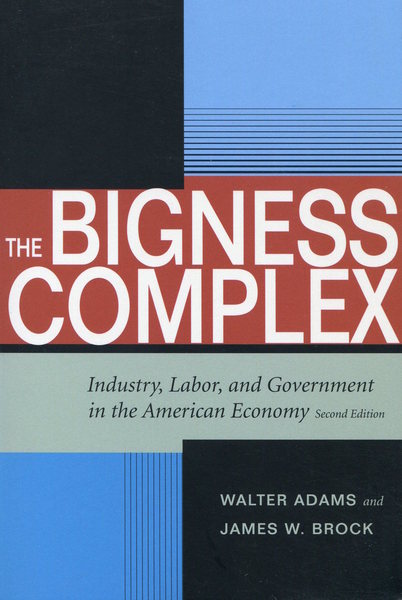 The Bigness Complex confronts head-on the myth that organizational giantism leads to economic efficiency and well-being in the modern age. On the contrary, it demonstrates how bigness undermines our economic productivity and progress, endangers our democratic freedoms, and exacerbates our economic problems and challenges.

This new edition has a thoroughly updated variety of issues, examples, and new developments, including government bailouts of the airline industry; regulation of biotechnology; the fiasco of recent electricity deregulation; and mergers and consolidations in oil, radio, and grocery retailing. The analysis is framed in the timeless context of American distrust of concentrations of power. The authors show how both the left and the right fail to address the central problem of power in formulating their diagnoses and recommendations. The book concludes with an alternative public philosophy as a viable guidepost for public policy toward business in a free-enterprise democracy.

The late Walter Adams was President and Distinguished Professor of Economics at Michigan State University. James W. Brock is the Moeckel Professor of Economics at Miami University in Oxford, Ohio. Adams and Brock have also co-authored The Tobacco Wars, The Structure of American Industry, Antitrust Economics on Trial, Adam Smith Goes to Moscow, and Dangerous Pursuits: Mergers and Acquisitions in the Age of Wall Street.

"Adams and Brock demolish the view that equates size and efficiency and expose how special interests distort public policy for the purpose of corporate welfare."

"Economics can't properly be separated from politics, because economic power translates directly into political power. At a time in our nation's history when wealth is more concentrated than at any time since the Gilded Age, The Bigness Complex is enormously helpful for understanding what's wrong and what's needed to put it right. Anyone who cares about the future of American capitalism and democracy should read this book and take to heart its message."

"This book brings the full, dramatic weight of mainstream economic research against the excesses and follies—and the dangers—of businesses that are simply too big. As Adams and Brock show, corporate obesity has cut efficiency, reduced innovation, and eroded the fairness of American society."