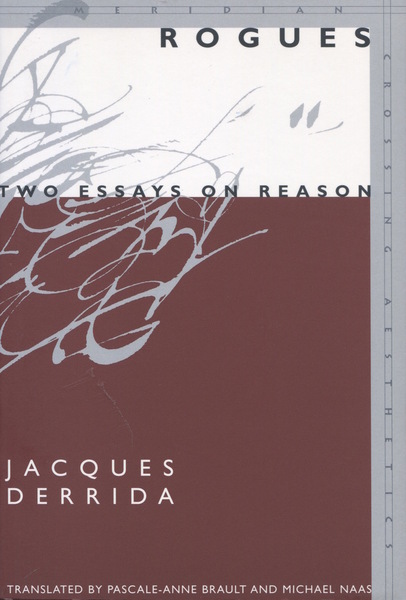 Rogues, published in France under the title Voyous, comprises two major lectures that Derrida delivered in 2002 investigating the foundations of the sovereignty of the nation-state. The term "État voyou" is the French equivalent of "rogue state," and it is this outlaw designation of certain countries by the leading global powers that Derrida rigorously and exhaustively examines.

Derrida examines the history of the concept of sovereignty, engaging with the work of Bodin, Hobbes, Rousseau, Schmitt, and others. Against this background, he delineates his understanding of "democracy to come," which he distinguishes clearly from any kind of regulating ideal or teleological horizon. The idea that democracy will always remain in the future is not a temporal notion. Rather, the phrase would name the coming of the unforeseeable other, the structure of an event beyond calculation and program. Derrida thus aligns this understanding of democracy with the logic he has worked out elsewhere. But it is not just political philosophy that is brought under deconstructive scrutiny here: Derrida provides unflinching and hard-hitting assessments of current political realities, and these essays are highly engaged with events of the post-9/11 world.

The late Jacques Derrida was Director of Studies at the Ecole des Hautes Etudes en Sciences Sociales and Professor of Humanities at the University of California, Irvine. Among the most recent of his many books to have been translated into English are Eyes of the University (2003), For What Tomorrow... with Elisabeth Roudinesco (2003), Counterpath with Catherine Malabou (2003), Negotiations (2002), Who's Afraid of Philosophy? (2002), and Without Alibi (2002). All of these have been published by Stanford University Press.

"Rogues is Derrida's most sustained reflection on deconstruction's relation to political theory in general and to the idea of democracy in particular. . . . Highly recommended."

"It is clear that Derrida was keen that the idea of 'democracy to come' would be central to the legacy of his thought, and for those who choose to take up that burden, Rogues will prove essential."