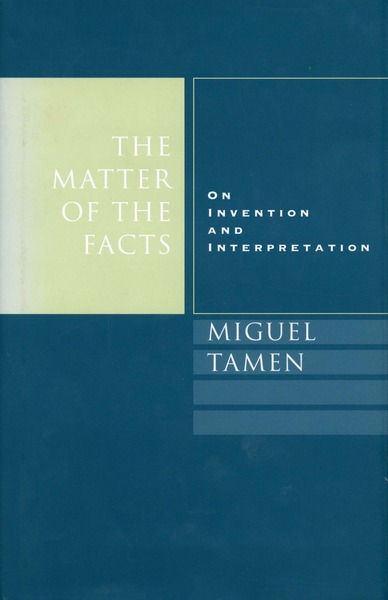 The Matter of the Facts
On Invention and Interpretation
Miguel Tamen

This book questions the presupposition that "interpretation" is the basic problem of language and examines how assumptions about the constructed nature of the object of interpretation affect current discussions about interpretation in the humanities.

The author is not taken by the universalizing claims of hermeneutics that everything is reducible to interpretation, but he is not interested in quarreling directly with those claims either. And with respect to the notion of invention—that things don't simply exist but are produced, made up—he likewise is interested neither in the objections usually brought against it nor in the strength of that notion in resisting them. Instead, he is interested in problematics that emerge from considering interpretation and invention together, as exemplified in close readings of three texts: Oscar Wilde's De Profundis, Friedrich Nietzsche's The Birth of Tragedy, and Immanuel Kant's Critique of Pure Reason, texts in which "in very different ways, a recognizable claim is made according to which 'the facts' (biographical in one case, historical in another case, and cognitive in a third case) are produced by their own descriptions and interpretations."

The author sees Wilde's and Nietzsche's texts as inventions gone wrong: Wilde's attempt to invent his own life and Nietzsche's suggestion that one can make up the art of the future. He sees Kant's text as a theory of the roots of invention and discusses it in relation to the production of both facts and knowledge. The Critique of Pure Reason is therefore understood as the result of Kant's dissatisfaction with, and constant rediscription of, the problem of invention.

Miguel Tamen is Senior Associate Professor of Literary Theory at the University of Lisbon. He is the author of Manners of Interpretation: The Ends of Argument in Literary Studies.

"Tamen has an extremely distinguished mind, both as a thinker and as a reader of texts. He also has an independent mind and thinks things out for himself, though he knows, and adroitly refers to, previous scholarship. The three central chapters on works by Wilde, Nietzsche, and Kant are truly remarkable, based on brilliant interpretations of key passages that are unfolded and explicated in detail. These are dazzling readings of great originality and persuasive insight."

"This brilliant book is a very thoughtful, very original, set of reflections on the nature of interpretation, and on the distinction between making and finding—between putting something into the text and finding features intrinsic to it. Philosophically sophisticated, it is a powerful and effective intervention in contemporary debates in literary theory."

"[The Matter of Facts] is an impressive accomplishment that betrays an original mind. The great strength of Tamen's investigation lies in his determination to concentrate exclusively on the problematics at hand, instead of engaging in fruitless ad hominem arguments."