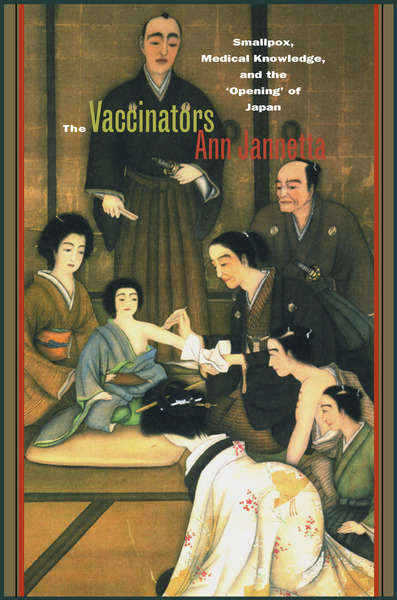 The Vaccinators
Smallpox, Medical Knowledge, and the ‘Opening’ of Japan
Ann Jannetta

In Japan, as late as the mid-nineteenth century, smallpox claimed the lives of an estimated twenty percent of all children born—most of them before the age of five. When the apathetic Tokugawa shogunate failed to respond, Japanese physicians, learned in Western medicine and medical technology, became the primary disseminators of Jennerian vaccination—a new medical technology to prevent smallpox. Tracing its origins from rural England, Jannetta investigates the transmission of Jennerian vaccination to and throughout pre-Meiji Japan. Relying on Dutch, Japanese, Russian, and English sources, the book treats Japanese physicians as leading agents of social and institutional change, showing how they used traditional strategies involving scholarship, marriage, and adoption to forge new local, national, and international networks in the first half of the nineteenth century. The Vaccinators details the appalling cost of Japan's almost 300-year isolation and examines in depth a nation on the cusp of political and social upheaval.

Ann Jannetta is Professor of History Emerita at the University of Pittsburgh. Her publications include Epidemics and Mortality in Early Modern Japan and "Public Health and the Diffusion of Vaccination in Japan" in What Do We Know about Asian Population History?

"Ann Jannetta has done a wonderful job of presenting not only the medical and political but also the artistic, intellectual, religious, and social context of the introduction of Jennerian vaccination to Japan . . . The Vaccinators is a wonderful addition to the scholarly literature on the Dutch enclave in Japan, on nineteenth-century Japan, on the history of medicine in Japan, and on the history of the worldwide diffusion of vaccination."

"Jannetta's narrative is genuinely engaging, and it is enriched by her use of primary sources in multiple languages . . . She delves deeply into decidedly local, personal interactions while keeping in view a broader, global historical context. This is quite an achievement."

"The Vaccinators provides a meticulously documented and compelling account of the invention and spread of smallpox vaccination and the vicissitudes of its introduction into Japan in the early 19th century . . . This is a work of immense value to scholars and student of late Edo and early Meju history, society and culture, the history of rangaku (Dutch studies) and ranpö (Dutch medicine) in Japan, the history of science and medicine, public health and epidemiology. Jannetta is to be congratulated on her prodigious achievement."

"Jannetta has accomplished an admirable task in tracing the technology transfer, which encompasses Europe, the Americas, and Asia, utilizing extensive sources written in multiple (some classical) languages. The book is useful for students and teachers in world history, medical history, environmental history, and Japanese history, society, and politics. For scholars interested in the changing relationships between people and microbes, and the dynamics of the nineteenth-century global commercial/intellectual networks and the Tokugawa seclusion policy, Jannetta's study will provide a wealth of insights."

"[A] concise and insightful medical history of late Tokugawa Japan, focusing on Japan's adoption of Jennerian vaccination against smallpox during the early 19th century . . . Jannetta's historical research provides a valuable avenue to understanding how contact with Western knowledge helped Japan break away from self-imposed isolation toward modernization."

"A fascinating look at Japanese culture and politics in the last century, and the attitudes of those outside who wanted to at least see in."

"In her new study, Professor Jannetta traces Edward Jenner's discovery of cowpox vaccination in rural England in 1798 to the primary role Japanese ranpo (Dutch, or Western methods) physicians played in institutionalizing medical knowledge by tirelessly promoting Jennerian vaccination to prevent smallpox. This is a deftly written and argued work on an important public health topic of nineteenth-century Japan, combined with a transnational examination of diffusing medical knowledge of one of the world's major epidemic diseases."

—Journal of the History of Medicine & Allied Sciences

"Jannetta deftly manages a broad range of international and local Japanese sources to support her case. The presentation is impeccable, and the prose is a pleasure to read . . . It is a book that deserves to be read by a wide range of medical historians as well as those interested mores specifically in Japanese social history." 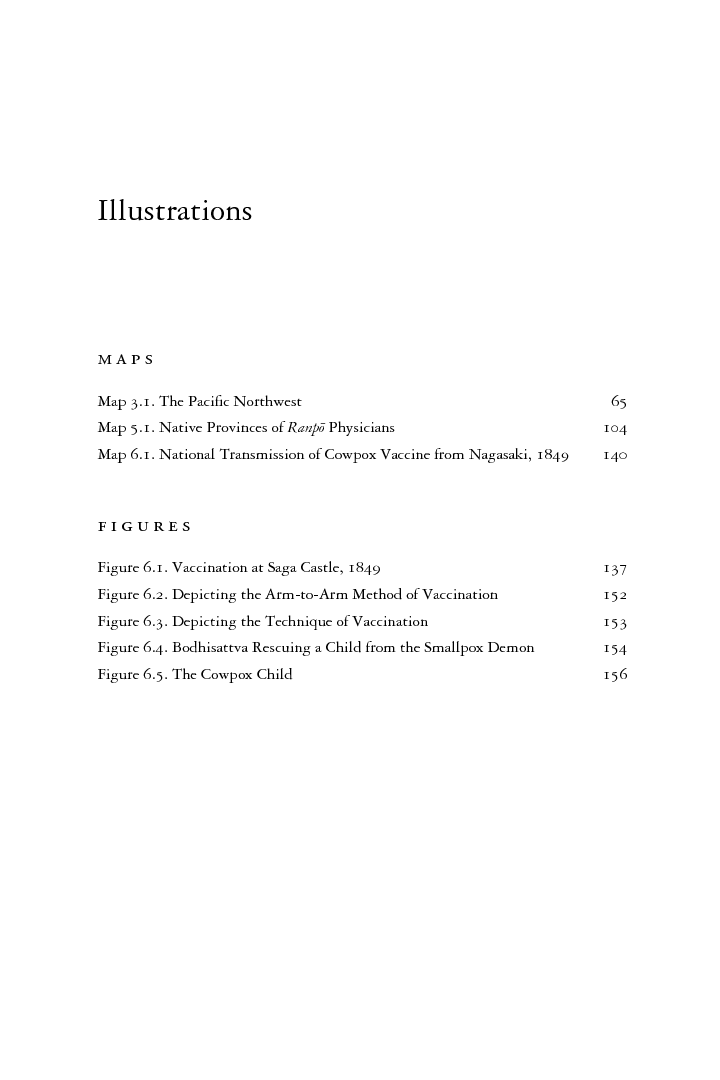 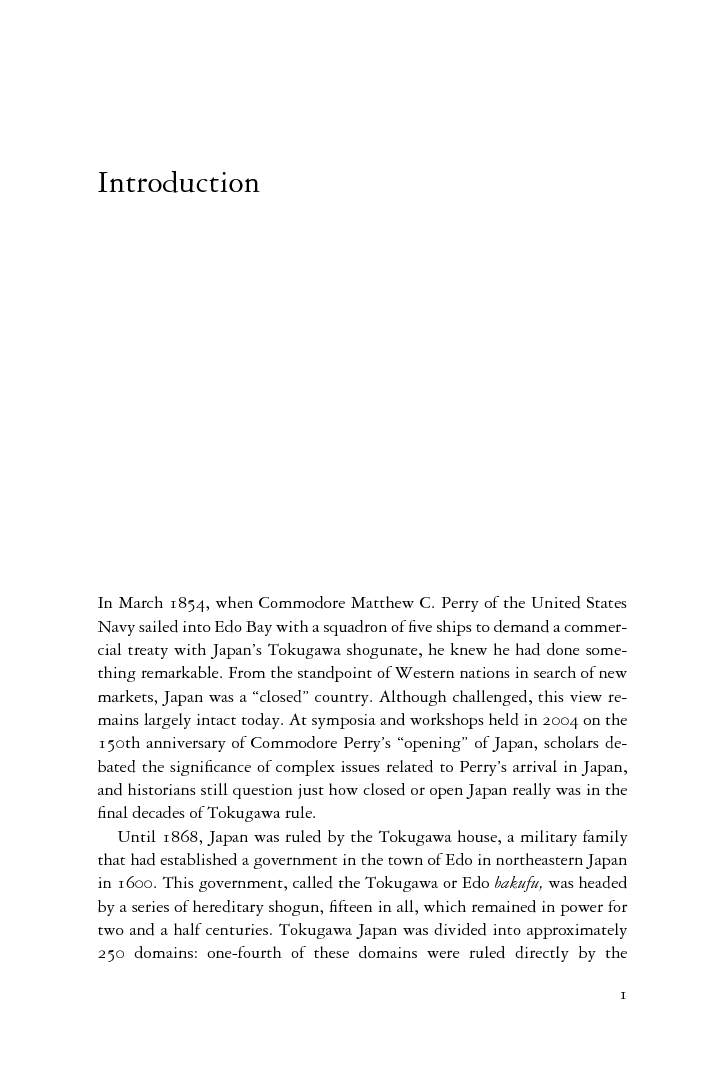 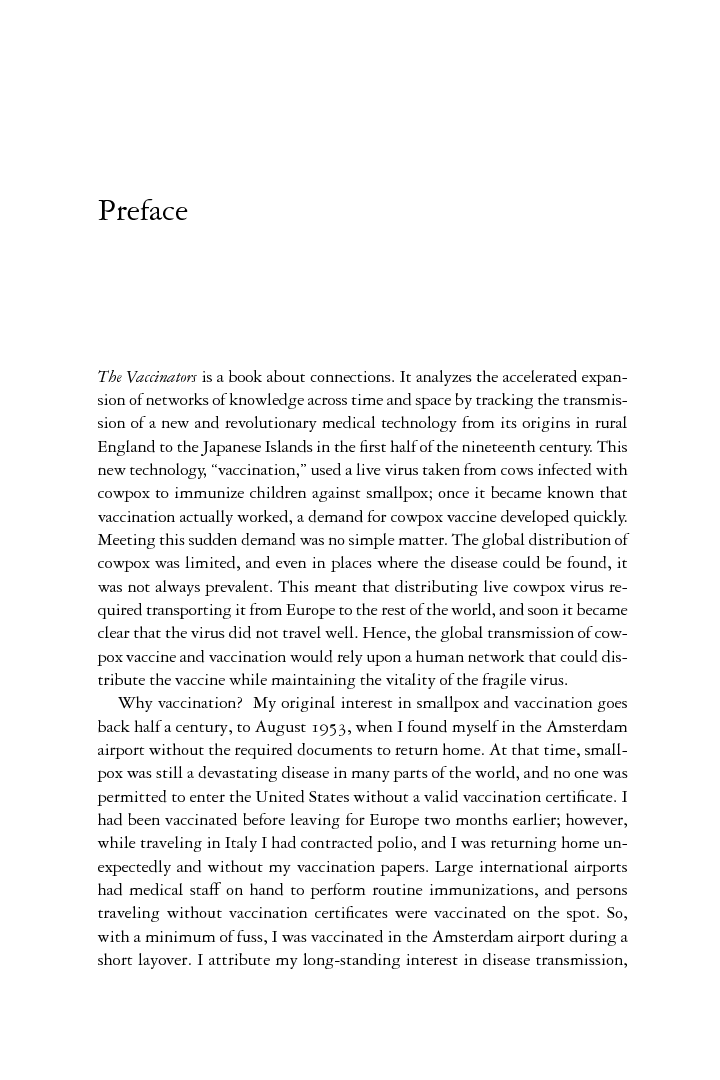 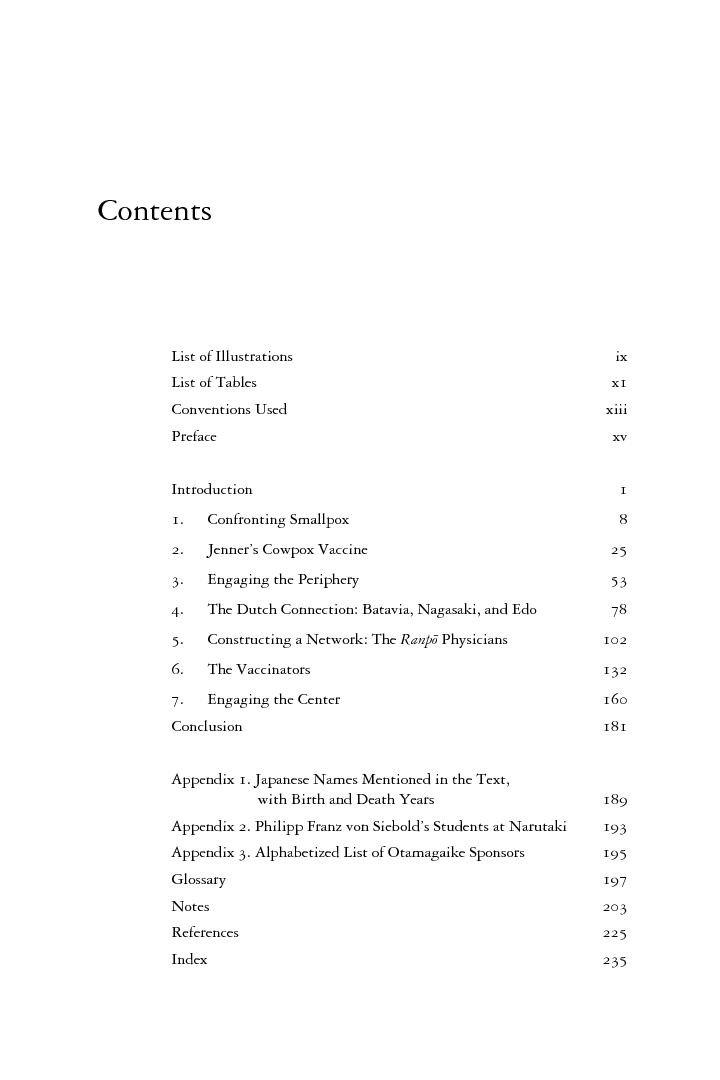 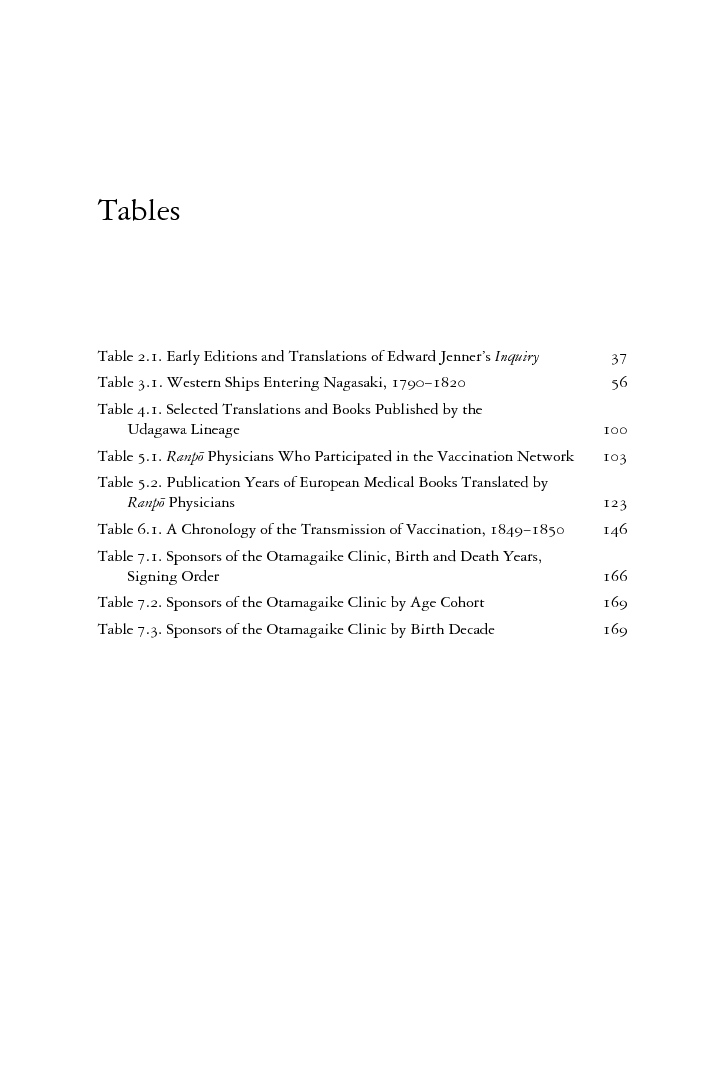