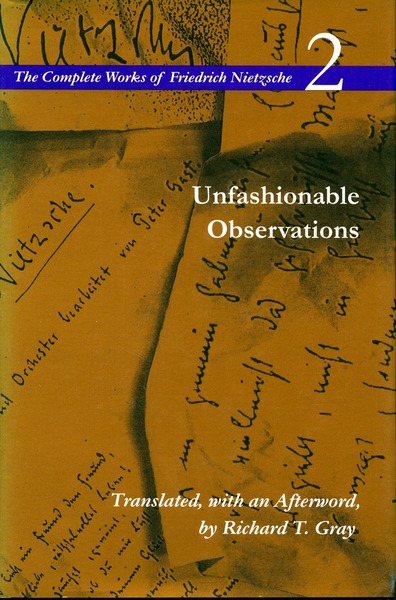 This new translation is the first to be published in a twenty-volume English-language edition of The Complete Works of Friedrich Nietzsche, the first complete, critical, and annotated translation of all of Nietzsche's work. The Stanford edition is based on the Colli-Montinari edition, which has received universal praise: "It has revolutionized our understanding of one of the greatest German thinkers"; "Scholars can be confident for the first time of having a trustworthy text."

Under the title Unzeitgemässe Betrachtungen, Nietzsche collected four essays published separately between 1873 and 1876: "David Strauss the Confessor and the Writer," "On the Utility and Liability of History for Life," "Schopenhauer as Educator," and "Richard Wagner in Bayreuth." The title, newly translated as Unfashionable Observations, spells out the common impulse linking these essays: Nietzsche's inimical attitude toward his "time," understood broadly as all the mainstream and popular movements that constituted contemporary European, but especially German, "culture" in the wake of the Prussian military victory over the French in 1871.

The Unfashionable Observations are foundational works for Nietzsche's entire philosophy, prefiguring both his characteristic philosophical style and many of the major ideas he would develop in his later writings. This is the first English translation to include Nietzsche's variants to the published text.

"The Colli-Montinari edition has revolutionized our understanding of one of the greatest German thinkers. As a result of the new view opened up by this edition, Nietzsche has clearly come into his own as one of the more important philosophers of modern times. The English-language edition should become a classic that will be used by generations of scholars."

"The Colli-Montinari critical edition of Nietzsche's works is one of the most important works of scholarship in the humanities in the last quarter century. It was not until after World War II that one began to realize the extent to which Nietzsche's notebooks had been tampered with, jumbled, badly deciphered, and poorly edited, and it was not until the Colli-Montinari edition that scholars could be confident for the first time of having a trustworthy text."