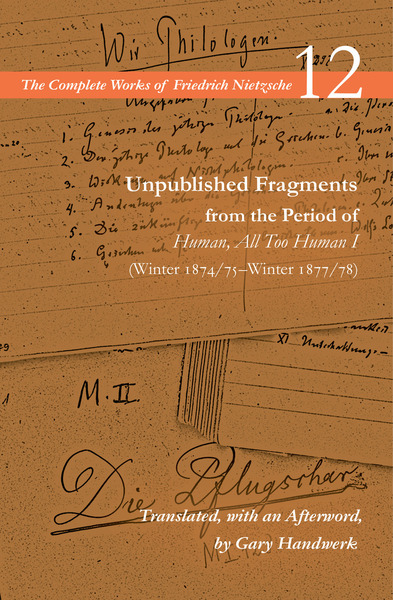 This volume in The Complete Works presents the first English translations of Nietzsche's unpublished notebooks from Winter 1874/1875 through 1878, the period in which he developed the mixed aphoristic-essayistic mode that continued across the rest of his career. These notebooks comprise a range of different materials, including early drafts and near-final versions of aphorisms that would appear in both volumes of Human, All Too Human. Additionally, there are extensive notes for a never-completed Unfashionable Observation that was to be titled "We Philologists," early drafts for the final sections of "Richard Wagner in Bayreuth," plans for other possible publications, and detailed reading notes on philologists, philosophers, and historians of his era, including Friedrich August Wolf, Eugen Dühring, and Jacob Burckhardt.

Through this volume, readers gain insight into Nietzsche's emerging sense of himself as a composer of complexly orchestrated, stylistically innovative philosophical meditations—influenced by, but moving well beyond, the modes used by aphoristic precursors such as Goethe, La Rochefoucauld, Vauvenargues, and Schopenhauer. Further, these notebooks allow readers to trace more closely Nietzsche's development of ideas that remain central to his mature philosophy, such as the contrast between free and constrained spirits, the interplay of national, supra-national, and personal identities, and the cultural centrality of the process of Bildung as formation, education, and cultivation.

With this latest book in the series, Stanford continues its English-language publication of the famed Colli-Montinari edition of Nietzsche's complete works, which include the philosopher's notebooks and early unpublished writings. Scrupulously edited so as to establish a new standard for the field, each volume includes an Afterword that presents and contextualizes the material it contains.

Gary Handwerk is the Bruce J. Leven Endowed Chair for Environmental Studies and Professor of Comparative Literature and Comparative History of Ideas at the University of Washington.