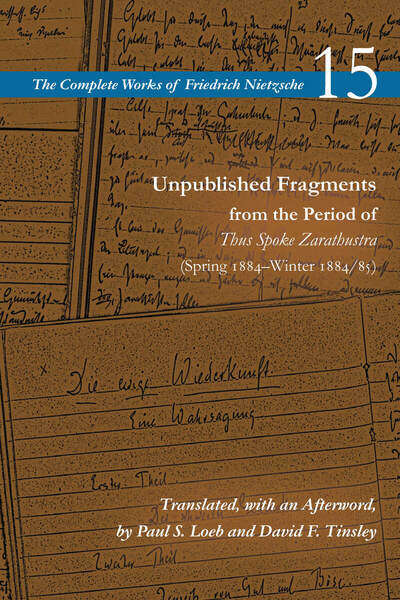 This volume provides the first English translation of Nietzsche's unpublished notes from the spring of 1884 through the winter of 1884–85, the period in which he was composing the fourth and final part of his favorite work, Thus Spoke Zarathustra. These notebooks therefore provide special insight into Nietzsche's philosophical concept of superior humans,as well as important clues to the identities of the famous nineteenth-century European figures who inspired Nietzsche's invention of fictional characters such as "the prophet," "the sorcerer," and "the ugliest human."In these notebooks, Nietzsche also further explores ideas that were introduced in the first three parts of Thus Spoke Zarathustra: Zarathustra's teaching about the death of God; his proclamation that it is time for humankind to overcome itself and create the superhumans; his discovery that the secret of life is the will to power; and his most profound thought—that the entire cosmos will eternally return.

Readers will encounter here a wealth of material that Nietzsche would include in his next book, Beyond Good and Evil, as he engages the ideas of Kant and Schopenhauer, challenges cultural icons like Richard Wagner, and mercilessly exposes the foibles of his contemporaries, especially of his fellow Germans. Readers will also discover an extensive collection of Nietzsche's poetry. Richly annotated and accompanied by a detailed translators' afterword, this volume showcases the cosmopolitanism at work in Nietzsche's multifaceted and critical exploration of aesthetic and cultural influences that transcend national (and nationalist) notions of literature, music, and culture.

Paul S. Loeb is Professor Emeritus of Philosophy at the University of Puget Sound and the author of The Death of Nietzsche's Zarathustra (2010).

David F. Tinsley is Professor Emeritus of German and Medieval Studies at the University of Puget Sound and the author of The Scourge and the Cross: Ascetic Mentalities of the Later Middle Ages (2010).