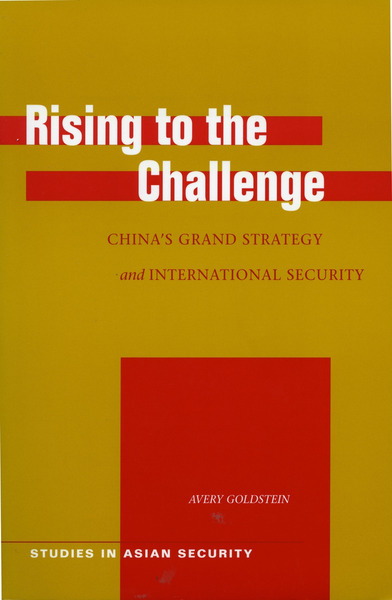 China’s increasing economic and military capabilities have attracted much attention in recent years. How should the world, especially the United States, respond to this emerging great power? A sensible response requires not only figuring out the speed and extent of China’s rise, but also answering a question that has received much less attention: What is China’s grand strategy?

This book describes and explains the grand strategy China’s leaders have adopted to pursue their country’s interests in the international system of the 21st century. The author argues that their strategy is designed to foster favorable conditions for continuing China’s modernization while also reducing the risk that others will decide a rising China is a threat that must be countered. Why did China’s leaders settle on this grand strategy and what are its key elements? What alternatives were available? Is the current approach yielding the results China anticipated? What does this grand strategy imply for international peace and security in the coming years—and, most critically, what are the prospects for an increasingly prominent China and a dominant United States to rise to the challenge of managing their inevitable disagreements?

Avery Goldstein is Professor of Political Science and Associate Director of the Christopher H. Browne Center for International Politics at the University of Pennsylvania and Senior Fellow at the Foreign Policy Research Institute in Philadelphia. He is the author, most recently, of Deterrence and Security in the 21st Century (Stanford University Press, 2000)

"Anyone with an interest in Chinese foreign policy has much to gain from the very valuable contribution made by Rising to the Challenge."

"This is an important work on a topic—Chinas grand strategy—on which we have had little serious and detailed work. It is very well written, well researched, and well argued. It should prompt a new debate on the subject among academics, policy makers, and the public."

"This in-depth and engaging analysis of Chinas grand strategy is well-timed given the recent re-emergence of the peaceful rise rubric."

"This is a comprehensive, insightful, and carefully written study of Beijings present and near future foreign policy."

"Goldstein does an excellent job of detailing the emergence of this Chinese grand strategy during the mid-1990s. . . . he has provided a very important contribution to the rise of China literature, and his insights on Chinas grand strategy are sure to shape the debate over the next several years."

"...Goldstein's book serves as a valuable guide both for those interested in Chinese strategic studies and for those seeking new insights on how the studies of international security and power politics are changing rapidly to meet new realities."