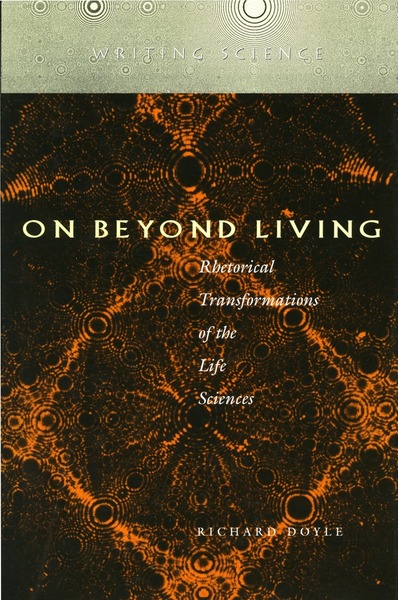 What do biologists study when they study "life" today? Drawing on tools from rhetoric and poststructuralist theory, the author argues that the ascent of molecular biology, with its emphasis on molecules such as DNA rather than organisms, was enabled by crucial rhetorical "softwares." Metaphors such as the genetic "code" made possible a transformation of the very concept of life, a transformation that often casts organisms as information systems.

With careful readings of key texts from the history of molecular biology—such as those of Erwin Schrödinger, George Gamow, Jacques Monod, and François Jacob—the author maps out the complex relations between the practices of rhetoric and the technoscientific triumphs they accompanied, triumphs that bolstered a "postvital" biology that increasingly elides and questions the boundary between organisms and machines.

There have been many popular books, and a few academic ones, on the Human Genome Initiatives. On Beyond Living is a genealogy of these initiatives, a map of how we have come to equate human beings with "information." Melding contemporary theory with scientific discourse, it is certain to provoke discussion (and controversy) in the fields of cultural studies, theory, and science with its penetrating inquiries into the relations between rhetoric and technoscience.

"On Beyond Living makes an important contribution to the discourse on the social construction of molecular biology. It will find a wide audience both in the social and cultural studies of science and in the rhetoric of science. The book fills a real and pressing need to look closely at assumptions and rhetorics that are all too often accepted without question. It is an important, indeed pathbreaking, book in its field."

More in Philosophy—History and Philosophy of Science