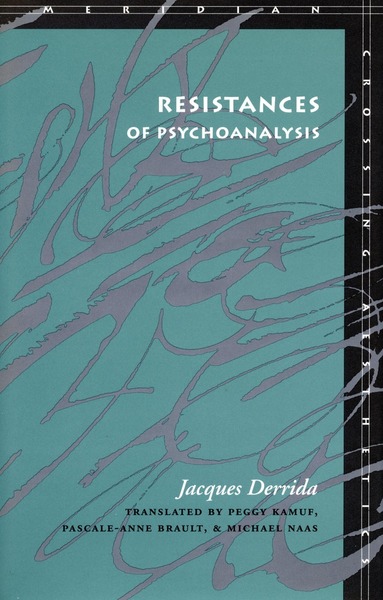 In the three essays that make up this stimulating and often startling book, Jacques Derrida argues against the notion that the basic ideas of psychoanalysis have been thoroughly worked through, argued, and assimilated. The continuing interest in psychoanalysis is here examined in the various "resistances" to analysis—conceived not only as a phenomenon theorized at the heart of psychoanalysis, but as psychoanalysis's resistance to itself, an insusceptibility to analysis that has to do with the structure of analysis itself.

Derrida not only shows how the interest of psychoanalysis and psychoanalytic writing can be renewed today, but these essays afford him the opportunity to revisit and reassess a subject he first confronted (in an essay on Freud) in 1966. They also serve to clarify Derrida's thinking about the subjects of the essays—Freud, Lacan, and Foucault—a thinking that, especially with regard to the last two, has been greatly distorted and misunderstood.

The first essay, on Freud, is a tour de force of close reading of Freud's texts as philosophical reflection. By means of the fine distinctions Derrida makes in this analytical reading, particularly of The Interpretation of Dreams, he opens up the realm of analysis into new and unpredictable forms—such as meeting with an interdiction (when taking an analysis further is "forbidden" by a structural limit).

Following the essay that might be dubbed Derrida's "return to Freud," the next is devoted to Lacan, the figure for whom that phrase was something of a slogan. In this essay and the next, on Foucault, Derrida reencounters two thinkers to whom he had earlier devoted important essays, which precipitated stormy discussions and numerous divisions within the intellectual milieus influenced by their writings. In this essay, which skillfully integrates the concept of resistance into larger questions, Derrida asks in effect: What is the origin and nature of the text that constitutes Lacanian psychoanalysis, considering its existence as an archive, as teachings, as seminars, transcripts, quotations, etc.?

Derrida's third essay may be called not simply a criticism but an appreciation of Foucault's work: an appreciation not only in the psychological and rhetorical sense, but also in the sense that it elevates Foucault's thought by giving back to it ranges and nuances lost through its reduction by his readers, his own texts, and its formulaic packaging.

Jacques Derrida was Director of Studies at the Ecole des Haute Etudes en Sciences Sociales, Paris, and Professor of Humanities at the University of California, Irvine. Among his books translated into English is Points . . . (Stanford, 1995).