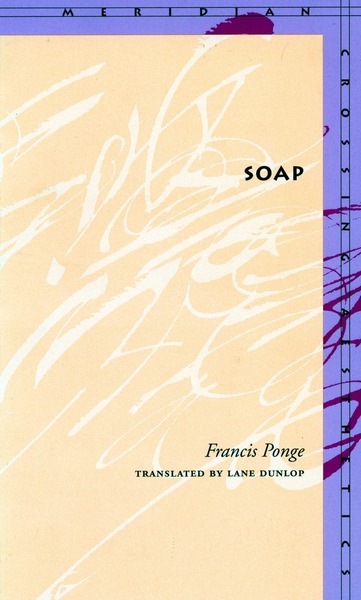 ". . . And now, dear reader, for your intellectual toilet, here is a little piece of soap. Well handled, we guarantee it will be enough. Let us hold this magic stone."

The poet Francis Ponge (1899-1988) occupied a significant and unchallenged place in French letters for over fifty years, attracting the attention and admiration of generations of leading intellectuals, writers, and painters, a notable feat in France, where reputations are periodically reassessed and undone with the arrival of new literary and philosophical schools.

Soap occupies a crucial, pivotal position in Ponge's work. Begun during the German occupation when he was in the Resistance, though completed two decades later, it determined, according to Ponge, the form of almost all his postwar writing. With this work, he began to turn away from the small, perfect poem toward a much more open form, a kind of prose poem which incorporates a laboratory or workshop, recounting its own process of coming into being along with the final result. The outcome is a new form of writing, which one could call "processual poetry." Ponge's later work, from Soap on, is a very important tool in the questioning and rethinking of literary genres, of poetry and prose, of what is literature.

There is a blurring of boundaries between Soap and soap (which was hard to come by during the Resistance and is also, of course, metaphorical for a larger social restitution). Soap contains the sum of Ponge's aesthetics and materialist ethics and his belief in the supremacy of language as it becomes the object of the text. In the words of Serge Gavronsky, "this work, perhaps one of the longest running metaphors in literature, slowly unwinds, bubbles in verbal inventions, and finally evaporates, leaving the water slightly troubled, slightly darker, but the hands clean, really clean. . . . Out of murky literary habits, Ponge has devised a way of cleaning his text, and through it, man himself, his vocabulary, and as a consequence, his way of being in the world."

Francis Ponge (b. 1899) became known in French literary circles in the wake of the First World War, but commenced his most important work during the German Occupation. His fame began to reach its present height with the respect shown him by Tel Quel in the late fifties.

“This text manages to be whimsical, political and philosophical all at once by behaving like its subject—soap—and slipping between modes.”—Matthea Harvey, Boston Review