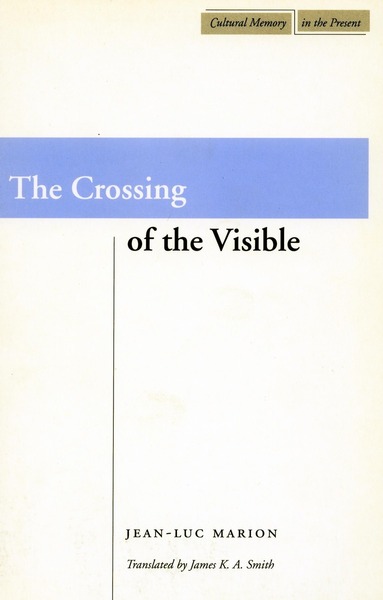 The Crossing of the Visible
Jean-Luc Marion Translated by James K. A. Smith
SERIES: Cultural Memory in the Present

Painting, according to Jean-Luc Marion, is a central topic of concern for philosophy, particularly phenomenology. For the question of painting is, at its heart, a question of visibility—of appearance. As such, the painting is a privileged case of the phenomenon; the painting becomes an index for investigating the conditions of appearance—or what Marion describes as "phenomenality" in general.

In The Crossing of the Visible, Marion takes up just such a project. The natural outgrowth of his earlier reflections on icons, these four studies carefully consider the history of painting—from classical to contemporary—as a fund for phenomenological reflection on the conditions of (in)visibility. Ranging across artists from Raphael to Rothko, Caravaggio to Pollock, The Crossing of the Visible offers both a critique of contemporary accounts of the visual and a constructive alternative. According to Marion, the proper response to the "nihilism" of postmodernity is not iconoclasm, but rather a radically iconic account of the visual and the arts that opens them to the invisible.

Jean-Luc Marion is Professor of Philosophy at the University of Paris, Sorbonne. He has also taught and lectured for more than fifteen years at various universities in the United States, notably at the University of Chicago. Among his books published in English translation are Being Given (Stanford, 2002), God Without Being, and Reduction and Givenness: Investigations of Husserl, Heidegger, and Phenomenology.