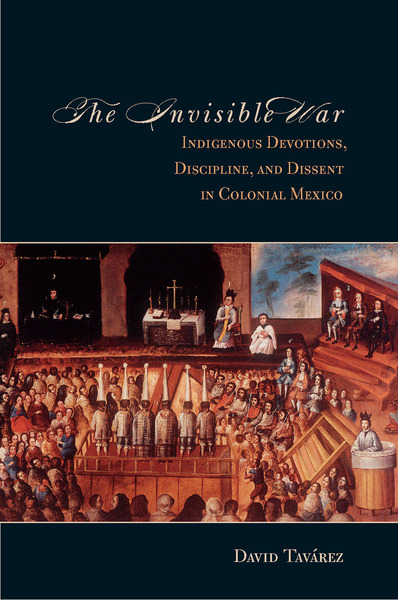 After the conquest of Mexico, colonial authorities attempted to enforce Christian beliefs among indigenous peoples—a project they envisioned as spiritual warfare. The Invisible War assesses this immense but dislocated project by examining all known efforts in Central Mexico to obliterate native devotions of Mesoamerican origin between the 1530s and the late eighteenth century.

The author's innovative interpretation of these efforts is punctuated by three events: the creation of an Inquisition tribunal in Mexico in 1571; the native rebellion of Tehuantepec in 1660; and the emergence of eerily modern strategies for isolating idolaters, teaching Spanish to natives, and obtaining medical proof of sorcery from the 1720s onwards. Rather than depicting native devotions solely from the viewpoint of their colonial codifiers, this book rescues indigenous perspectives on their own beliefs. This is achieved by an analysis of previously unknown or rare ritual texts that circulated in secrecy in Nahua and Zapotec communities through an astute appropriation of European literacy. Tavárez contends that native responses gave rise to a colonial archipelago of faith in which local cosmologies merged insights from Mesoamerican and European beliefs. In the end, idolatry eradication inspired distinct reactions: while Nahua responses focused on epistemological dissent against Christianity, Zapotec strategies privileged confrontations in defense of native cosmologies.

David Tavárez is Associate Professor of Anthropology at Vassar College. He is a co-editor of Chimalpahin's Conquest: A Nahua Historian's Rewriting of Francisco López de Gómara's La conquista de México (2010).

"In David Tavarez's The Invisible War, two longstanding projects come to fruition: Inquisition studies and Indigenous-language-based ethnohistory . . . The book is admirably transparent in its use of text and data, and impressive in its mobilization of diverse tools of inquiry . . . Its greatest strength, [...], is its rich description of the diversity of cosmologies and magical practices that existed in the netherworld of unsanctioned belief among communities whose cultures layered Indigenous and European religion."

"David Tavárez's book, The Invisible War, offers an especially significant challenge to the colonial religious historiography . . . Perhaps the book's greatest contribution to ethnohistory lies in its exploration of clandestine literacies in which indigenous ritual specialists produced a variety of texts—calendrical, astrological, and liturgical."

"David Tavárez renders The Invisible War in such incredible detail that it is difficult to conceive of this as his first book. It reads more like a life's work: comprehensive, yet careful; formidable, but rewarding; and engrossing while exact(ing). Each sentence demands the reader's full attention because it presents so much information about specific people, particular circumstances, and the precise interplay of devotional activities, disciplinary measures, and dissent . . . Tavárez's book is an achievement in its accuracy, analysis, and approach."

"This meticulously researched and beautifully written work is a major contribution to our understanding of religion in indigenous communities and the Catholic Church in central Mexico and Oaxaca . . . [N]uanced, engaging, and thought-provoking."

"Tavárez has undertaken an ambitious study of a key and hitherto insufficiently addressed issue in Mexican indigenous and religious history . . . Tavárez has written an impressive and a scholastically rigorous book that will be welcomed by students and scholars of colonial Latin America, ethnohistory, colonialism, and religious history."

"This book is worthy of inclusion in any Mesoamerican historian's library. Tavárez offers a thoughtful framework for examining Spanish/Spanish, native/Spanish, and native/native interactions under stressful conditions; valuable insights into these complex and multifaceted relationships; and plenty of interesting biographical, institutional, and situational information. All these elements together make this a useful reference work as well."

"The Invisible War provides a remarkably full and genuinely historical study of the little-known extirpation campaigns in colonial Mexico and what, in practice, idolatry in 'Indian' communities of central Mexico and Oaxaca came to mean for all the parties involved. It interweaves the actions of colonial judges and Catholic priests, Nahuatl- and Zapotec-speaking nobles, shamans, and villagers, and an array of ritual practices and sacred texts. While insisting on local 'diversity of indigenous forms of consciousness,' David Tavárez offers a sustained, deeply researched interpretation of native devotions in the colonial period as epistemological dissent to Christian evangelization and extirpation. Here is native thought and action understood in new, connected, and richly contextualized ways."

"In this eye-opening book, Tavárez shows that colonial religion was an 'archipelago of faith,' of multifarious and constantly changing indigenous Christianities. Change was often prompted by violence and was as relentless as the strategies of those friars, parish priests, and minor civil magistrates who devoted their lives to homogenizing the faith and rooting out idolatry, the origin of all sin. This is a magisterial study that spans three centuries and plumbs a formidable cache of Nahua, Zapotec, and ecclesiastical sources scattered throughout Europe and the Americas. A landmark." 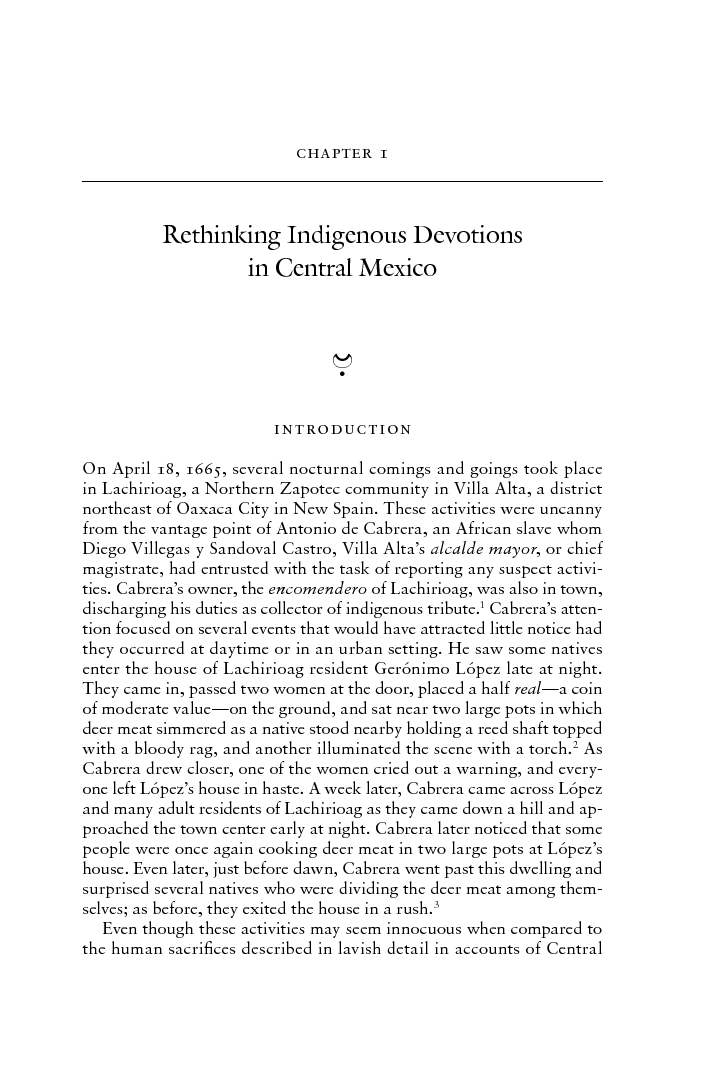 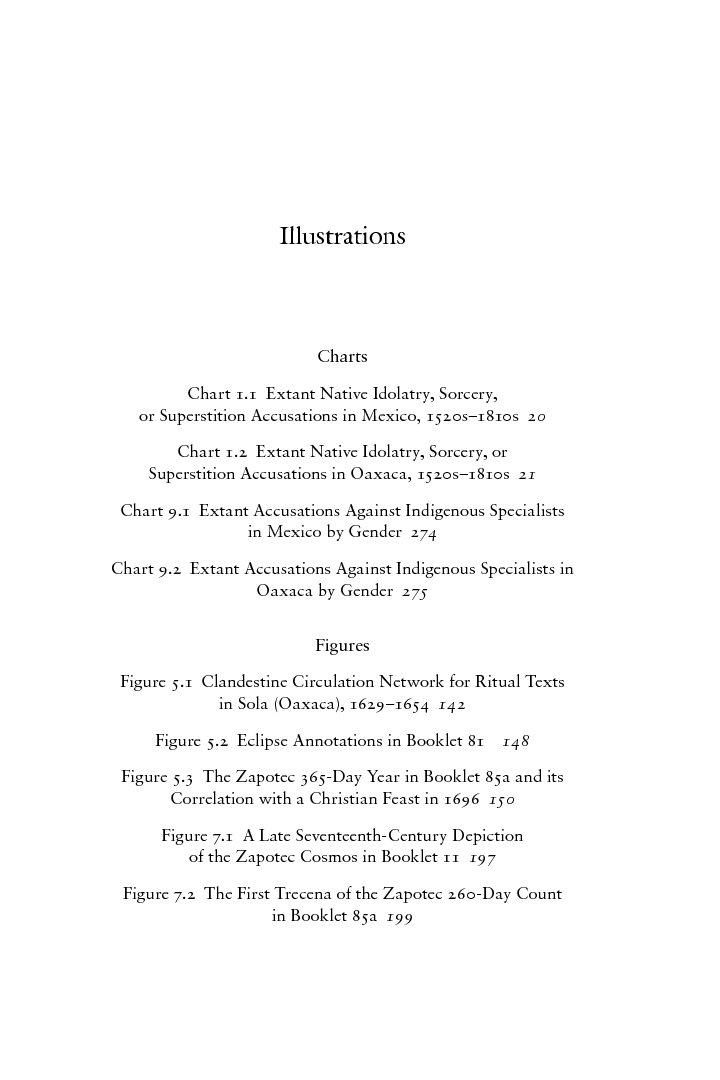 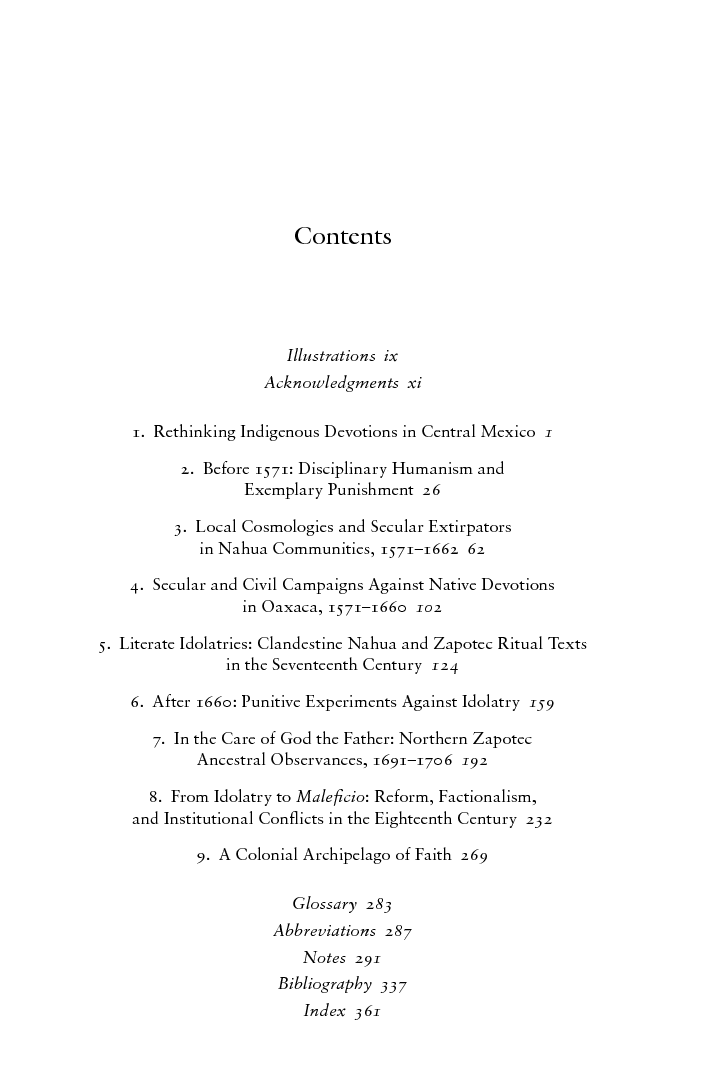