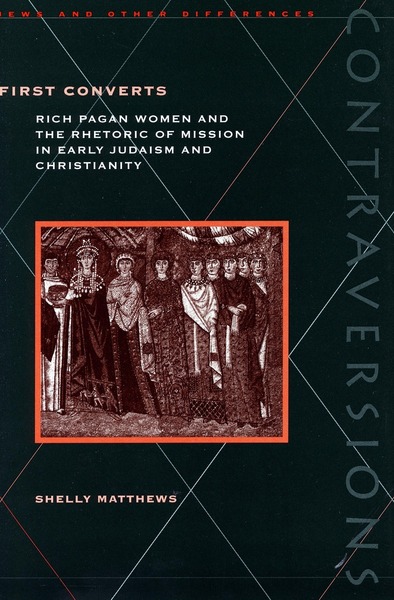 First Converts
Rich Pagan Women and the Rhetoric of Mission in Early Judaism and Christianity
Shelly Matthews
SERIES: Contraversions: Jews and Other Differences

It has often been said that rich pagan women, much more so than men, were attracted both to early Judaism and Christianity. This book provides a new reading of sources from which this truism springs, focusing on two texts from the turn of the first century, Josephus's Antiquities and Luke's Acts.

The book studies representation, analyzing the repeated portrayal of rich women as aiding and/or converting to early Judaism in its various forms. It also shows how these sources can be used in reconstructing women's history, thus engaging current feminist debates about the relationship of rhetorical presentation of women in texts to historical reality.

Because many of these texts speak of high-standing women's conversion to Judaism and early Christianity, this book also engages in the current debate about whether early Judaism was a missionary religion. The author argues that focusing on these stories of women converts and adherents, which have been largely ignored in previous discussions of the missionary question, sets the missionary question in a new, more adequate framework.

The first chapter elucidates a story in Josephus's Antiquities of the mishaps of two Roman matrons devoted to Isis and Jewish cults by considering the common Hellenistic topos linking high-standing women, promiscuity, and religious impropriety. The remaining chapters demonstrate that in spite of this topos, Josephus, Luke, and other religious apologists did tell stories of rich women's associations with their communities for positive rhetorical effect. In so doing, the book challenges the widespread assumption that women's association with "foreign" religious cults was always derided, questions scholarly arguments about public and private roles in antiquity, and invites reflection on issues of mission and conversion within the larger framework of Greco-Roman benefaction.

Shelly Matthews is Assistant Professor of Religion at Furman University.

“...Matthew’s book is beautifully written, easy to read and full of exciting historical and literary insights. It is an important contribution to the library of women’s history in antiquity.”—Tal Ilan, Freie Universitat, Berlin