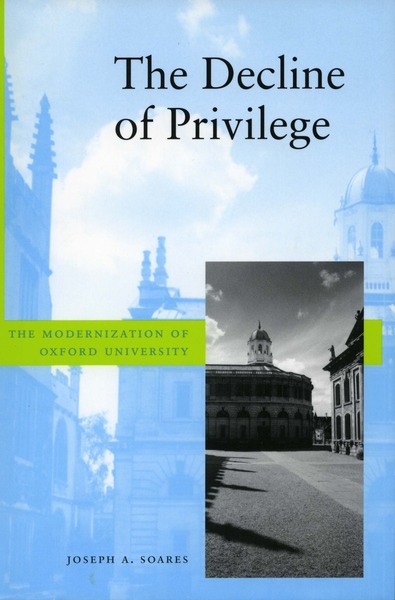 The Decline of Privilege
The Modernization of Oxford University
Joseph A. Soares

Winner of the the 2000 Best Book Award, sponsored by the American Sociological Association, Section on the Sociology of Culture.

This book studies Oxford University's transformation—and the political hazards for academics that ensued—when, after World War II, it changed from a private liberal-arts club with aristocratic pretensions into a state university heavily committed to the natural sciences, and with a middle-class constituency and a meritocratic ethos.

Despite these changes, the author shows that Oxford has not been able to elude its long-standing Brideshead Revisited reputation. This antiquated image became a source of difficulties when the Labour Party in the 1960's sought to expand educational opportunities to promote the cause of social justice. In the 1980's the University again came under attack, this time for its supposedly anti-industrial ethos, as Margaret Thatcher's Conservative Party attempted to reverse Britain's economic decline.

The largely unrecognized process of internal change at Oxford is shown to have been driven by two distinct dynamics: its scientists took advantage of huge increases in government funding to build departmental empires, while an informal alliance of reform-minded arts dons strove to renew Oxford's collegiate traditions of scholarly excellence and self-governance.

When the scientists and reformist dons revitalized the University in the light of changed social and economic conditions, they inadvertently eroded the foundations of its autonomy. During its transformation, Oxford lost its upper-class ties, its financial self-sufficiency, and its deferential friends in government. As a result, it was at its weakest when the Thatcher government sought to harness universities to the goals of economic competition. Consequently, Thatcherites successfully rewrote the compact between the state and universities, including the abolition of tenure for new faculty and the elimination of block grant funding. Thus, paradoxically, Oxford's internal renewal coincided with a surrender of its institutional independence.

Joseph A. Soares is Associate Professor of Sociology at Yale University.

"Soares writes a lively narrative full of interesting sketches of individuals and events. He navigates the arcane relationships between the Oxford colleges and the University with great clarity. And he deftly handles the ironies of the "Oxford Myth" and its obfuscation of the realities of modern Oxford."

"Once there was an ancient foundation, a seat of privilege and powerful connections. Then, quickly, quietly, working from within, it modernized itself. But old myths clung like ivy, failing to reflect the meritocratic make-over, and exposing it in due course to attacks from the Left and Right—attacks to which it was all the more vulnerable for the loss of its old Establishment friends and new dependence on the public purse. This is the tale told by Joseph Soares in The Decline of Privilege: The Modernization of Oxford University, and he tells it enormously well, with a wealth of carefully researched detail, a sharp sense of paradox, and a nice balance between intellectual framework and the living zest of incident and personality."