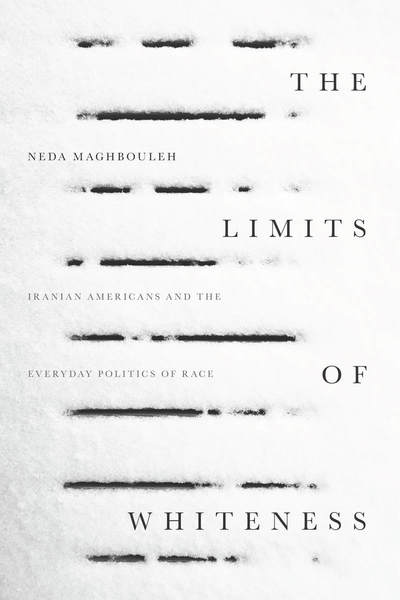 Honorable Mention in the 2018 PROSE Award in the category of Cultural Anthropology & Sociology, sponsored by the Professional and Scholarly Publishing Division, Association of American Publishers.

When Roya, an Iranian American high school student, is asked to identify her race, she feels anxiety and doubt. According to the federal government, she and others from the Middle East are white. Indeed, a historical myth circulates even in immigrant families like Roya's, proclaiming Iranians to be the "original" white race. But based on the treatment Roya and her family receive in American schools, airports, workplaces, and neighborhoods—interactions characterized by intolerance or hate—Roya is increasingly certain that she is not white. In The Limits of Whiteness, Neda Maghbouleh offers a groundbreaking, timely look at how Iranians and other Middle Eastern Americans move across the color line.

By shadowing Roya and more than 80 other young people, Maghbouleh documents Iranian Americans' shifting racial status. Drawing on never-before-analyzed historical and legal evidence, she captures the unique experience of an immigrant group trapped between legal racial invisibility and everyday racial hyper-visibility. Her findings are essential for understanding the unprecedented challenge Middle Easterners now face under "extreme vetting" and potential reclassification out of the "white" box. Maghbouleh tells for the first time the compelling, often heartbreaking story of how a white American immigrant group can become brown and what such a transformation says about race in America.

Neda Maghbouleh is Assistant Professor of Sociology at the University of Toronto.

"In this brilliant, beautifully written, and persuasive book, Maghbouleh demonstrates that Iranian Americans inhabit a complex and contradictory relationship to race. The poignant portraits of second-generation Iranian Americans reveal whiteness to be a volatile social construction, shaped by political, cultural, linguistic, and religious practices that initially might seem to have little to do with race."

—George Lipsitz, author of The Possessive Investment in Whiteness

"The Limits of Whiteness is cutting-edge scholarship at its best. Beautifully written and insightfully researched, it is essential reading for those interested in the fraught and capacious legacies, and afterlives, of Middle Eastern and American racial projects."

—Sarah Gualtieri, author of Between Arab and White

"I've been writing personal essays about Iranians and race for years, but Neda Maghbouleh's The Limits of Whiteness provides a much-needed sociologist's examination. Maghbouleh seamlessly navigates the historical, anthropological, and political, in a work as engaging as it is informative. This trailblazing book should be required reading for anyone interested in race in America, period."

—Porochista Khakpour, author of Sons & Other Flammable Objects and The Last Illusion

"While there is much for a scholar or advanced graduate student of race, migration, or Middle East studies to glean from the text, the book would be a welcome addition to introductory courses in American studies, ethnic studies, anthropology, and sociology, and as shared family reading in Iranian American households. The book is a conversation starter and an insightful, timely analysis of what race means and feels like for brown youth at the limits of whiteness."

"While numerous sociological studies have examined how Jewish, Italian, and Irish Americans have "become white" over time,...Neda Maghbouleh is interested in how Iranian Americans and those of other Middle Eastern backgrounds have moved back and forth across the color line....Maghbouleh's book illustrates the inadequacy of existing studies of American whiteness."

"Social science studies on race and Iranians, especially full-length books, are few. So this book significantly contributes to the scarce but emerging research on Iranians in diaspora. It also endeavors to better situate the immigration scholarship with that of race. Lastly, The Limits of Whiteness comes at a time when discussions surrounding immigrants and their children continue to take center stage in American political discourse and immigration policy."

The Limits of Whiteness