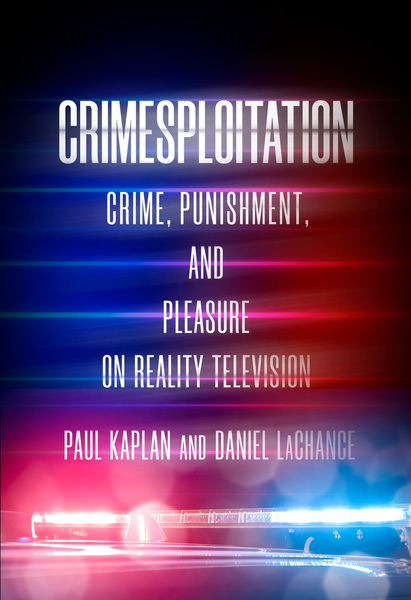 "Due to the graphic nature of this program, viewer discretion is advised." Most of us have encountered this warning while watching television at some point. It is typically attached to a brand of reality crime TV that Paul Kaplan and Daniel LaChance call "crimesploitation": spectacles designed to entertain mass audiences by exhibiting "real" criminal behavior and its consequences. This book examines their enduring popularity in American culture. Analyzing the structure and content of several popular crimesploitation shows, including Cops, Dog: The Bounty Hunter, and To Catch a Predator, as well as newer examples like Making a Murderer and Don't F**K with Cats, Kaplan and LaChance highlight the troubling nature of the genre: though it presents itself as ethical and righteous, its entertainment value hinges upon suffering. Viewers can imagine themselves as deviant and ungovernable like the criminals in the show, thereby escaping a law-abiding lifestyle. Alternatively, they can identify with law enforcement officials, exercising violence, control, and "justice" on criminal others. Crimesploitation offers a sobering look at the depictions of criminals, policing, and punishment in modern America.

Paul Kaplan is Professor of Criminal Justice in the School of Public Affairs at San Diego State University. He is the author of Murder Stories: Ideological Narratives in Capital Punishment (Lexington, 2013).

Daniel LaChance is Winship Distinguished Research Professor in History at Emory University. He is the author of Executing Freedom: The Cultural Life of Capital Punishment in the United States (Chicago, 2016).

"Insisting that the consumption of other people's pain is a defining feature of the neoliberal carceral state, Crimesploitation will not let us meaninglessly 'escape' into our true crime media streaming and listening. Instead, Kaplan and LaChance move us toward a critical reckoning with the exploitative forms of (un)freedom that media's spectacle of crime and punishment have conjured. A powerful dose of thoughtful accountability, this volume points the way to getting truly 'real' aboutand intervening inthe suffering that a culture of punishment has produced. I cannot wait to cite, teach, and buy copies of this book for friends and family."

—Michelle Brown, The University of Tennessee

"Kaplan and LaChance show that crimesploitation programs help to maintain the status quo of the neoliberal carceral state. Crimesploitation's focus on individual pathology as a cause of crime and 'law and order' as the solution to crime steers viewers away from important structural causes of crime and the need for reform in the criminal justice system and society-at-large. They do so while exploiting people in their worst moments, showing a 'reality' of crime that carefully avoids being too real."