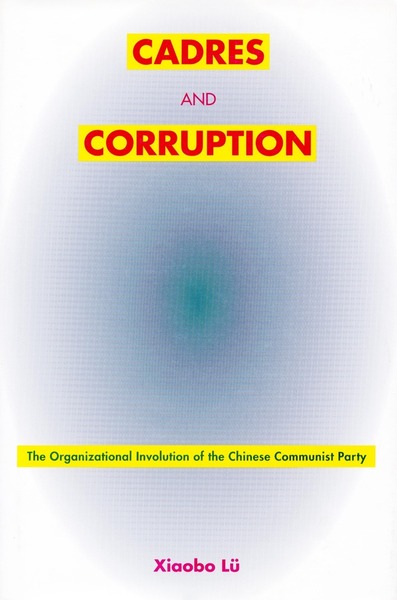 The most up-to-date and comprehensive analysis of corruption and change in the Chinese Communist Party, Cadres and Corruption reveals the long history of the party's inability to maintain a corps of committed and disciplined cadres. Contrary to popular understanding of China's pervasive corruption as an administrative or ethical problem, the author argues that corruption is a reflection of political developments and the manner in which the regime has evolved.

Based on a wide range of previously unpublished documentary material and extensive interviews conducted by the author, the book adopts a new approach to studying political corruption by focusing on organizational change within the ruling party. In so doing, it offers a fresh perspective on the causes and changing patterns of official corruption in China and on the nature of the Chinese Communist regime.

By inquiring into the developmental trajectory of the party's organization and its cadres since it came to power in 1949, the author argues that corruption among Communist cadres is not a phenomenon of the post-Mao reform period, nor is it caused by purely economic incentives in the emerging marketplace. Rather, it is the result of a long process of what he calls organizational involution that began as the Communist party-state embarked on the path of Maoist "continuous revolution." In this process, the Chinese Communist Party gradually lost its ability to sustain officialdom with either the Leninist-cadre or the Weberian-bureaucratic mode of integration. Instead, the party unintentionally created a neotraditional ethos, mode of operation, and set of authority relations among its cadres that have fostered official corruption.

"In a nuanced, informative, and analytically sophisticated fashion, this book traces present-day corruption in China back historically to institutional frameworks that the Communist Party put in place prior to its rise to power. In a fascinating narrative, the author shows the mutation of these institutions and of officials' behavior over the succeeding decades."

"Highly recommended for upper-division undergraduates and above."

"Thoroughly reserched and clearly argued . . . will undoubtedly provoke ongoing debate on this significant issue of corruption which some see as threatening to undermine the Chinese communist regime."

"With a broad definition of cadre corruption that includes not only criminal acts but deviations form organizational norms the Communist regime expected officials to adhere to, this book examines the changing patterns of official corruption from an entirely new perspective. Thoroughly researched, tightly argued, and succinctly written, it offers and excellent bird's eye view of a major problem and how the regime has endeavored to deal with it."

"Xiabo Lu's new book, Cadres and Corruption, provides a major contribution to the study of corruption in the People's Republic of China. . . . An impressive body of detailed primary data and secondary analyses . . . Xiabo Lu's new book provides a rich and nuanced analysis of the organizational roots of Corruption in China . . . his argument ought to command the attention of serious students of Chines politics, not just those interested in corruption."

—The Journal of Politics

"Lu succeeds brilliantly in . . . describ[ing] the evolution of the Chinese Communist Party and its cadres, and the effect of these changes on China's society, politics, and economy. The research is strong, the writing is engaging throughout, and the work will be of interest not only to specialists in modern China, but also to students and others who seek an informative overview of China's major political developments over the past half century."

"In this meticulously researched, closely reasoned, and well-written study, Xiaobo Lu takes the reader behind the headlines to analyze the organizational context that makes the [People's Republic of China] one of the most corrupt societies in the world.—The Historian

"This book is rich in informaiton, and can be used at undergraduate level as a good introduction to all different types of official corruption in China."

"A detailed, rich, and textured account of the functioning and evolution of the Chinese bureaucracy from the thirties to the nineties. The book is fascinating reading to anyone who wants to know about China and would be particularly valuable to anthropologists, political scientists and sociologists interested in corruption, bureaucracy or party organization in socialist societies or developing countries."